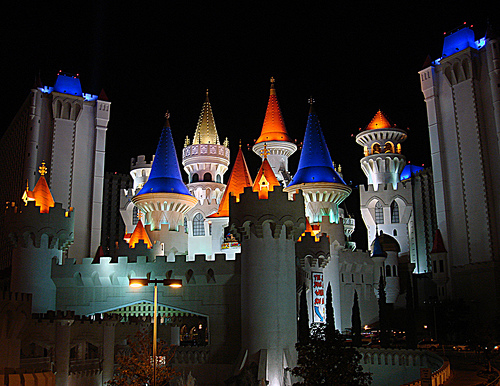 From its tall blue and red spires to the fortifications that surround this fictitious castle, there’s no missing Excalibur Hotel and Casino on the Las Vegas Strip. Owned by MGM Mirage, Excalibur takes its name from the mythical sword of King Arthur. The hotel’s façade is a stylized image of a castle, and, until 2007, a wizard-like figurine representing Merlin looked out from a high turret.

Excalibur opened on June 19, 1990. It was originally built by Circus Circus company. At that time, it was the largest hotel in the world. In 2005, Excalibur (along with other hotels in the Mandalay Resort Group) was bought by MGM Mirage.

Excalibur has 4,008 rooms. Out of those, 2,000 rooms are newly remodeled and feature 42″ plasma screen televisions, alarm clocks with iPod inputs and custom pillow top mattresses made with Egyptian cotton.

Excalibur is relatively affordable for all visitors to Las Vegas. Prices generally range between $50 and $100 per night, though there are frequent promotions, which drop the prices throughout the year. During peak season, the average prices at Excalibur can hover around $200 per night.

The total gaming area is 100,000 square feet. It is loud, crowded and constantly moving with people making their way through the casino floor. This is a high energy resort, and the casino reflects that feeling.

There are a number of table games including blackjack, craps, roulette, poker, big six and mini-baccarat. A party pit with go-go dancers keeps players invigorated. Slots and live keno games are up and running 24 hours a day as well. 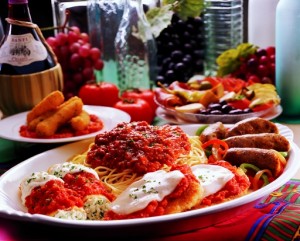 Excalibur’s dining options are known for the variety, value and service. In general, dining is a casual affair here. The Steakhouse at Camelot is probably the nicest restaurant on site. The resort’s buffet is a popular option with vacationing families while Dick’s Last Resort is a haven for anyone looking to laugh out loud with their meal. The Village Food Court offers several cafes and fast food options to choose from when you are on the run.

>>read more about the restaurants at Excalibur Hotel and Casino

People don’t visit Excalibur for its nightlife. In fact, it doesn’t have a nightclub nor are there any legendary lounges or bars in the resort. Octane and The Lounge have live music throughout the night, both of which are fun because they’re underrated and therefore not too crowded. Some of the restaurants are open late and Fun Dungeon is open until 1:00 a.m. on Friday and Saturday as well. In general, though, this isn’t the resort to hit up for the typical Las Vegas nightlife.

>>read more about the nightlife at Excalibur Hotel and Casino

Excalibur’s entertainment is appropriate for families but also fun and entertaining for other audiences as well. In addition to nightly live music, there are several shows that play daily at the resort. Comedy and a male strip show are the standing performances here, but most people come to Excalibur to enjoy the Tournament of Kings, a medieval variety and dinner show.

>>read more about the entertainment at Excalibur Hotel and Casino 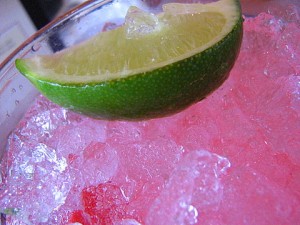 Excalibur Hotel and Casino is known for its incredible variety of things to do. The Fun Dungeon, the resort’s midway, is in expansive area of arcade, video and carnival games as well as 4D rides and a laser maze. There are a few medieval novelty shops and clothing stores on the Castle Walk. The pool is free to both guests and non-gue

sts and consists of four pools, including an 18+ pool and one with water slides. There is also an on-site spa.

Due to its high energy, exciting atmosphere, Excalibur is a good choice for families with children or people who are kids at heart. It is also an ideal home base if you’re traveling to Las Vegas for a stress-free, fun time. Also, for those attending a convention at Mandalay Bay, booking a room at Excalibur is considerably less expensive and still easily accessible to all the convention’s events.

Not sure if Excalibur Hotel and Casino is the right one for you? Check out other Las Vegas accommodations.