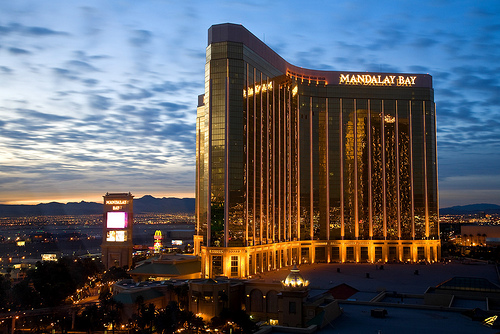 Located on the south end of the Las Vegas Strip, many people tend to overlook Mandalay Bay Hotel & Casino, a luxury hotel casino owned by MGM Mirage. Unless they’ve booked a room at Mandalay Bay, visitors tend to skip it because it’s not a thoroughfare to another resort.

Because of its location, Mandalay Bay Hotel & Casino receives fewer casual visitors than most of Las Vegas’ other resorts, but those who stop by are greatly rewarded with some of the best restaurants in town, an incredible lineup of entertainment and one of the most elaborate pools on the Strip. Together with THEhotel at Mandalay Bay, it offers more than 4,000 hotel rooms for guests. It also houses a convention center and an events center.

Hotels/Resorts Located Nearby: Mandalay Bay is located next to Luxor. Tropicana is the closest resort located across the street, and Excalibur Hotel-Casino is just a short distance away. Mandalay Bay is connected by the free Mandalay Bay Tram to its sister properties, Excalibur and Luxor.

Mandalay Bay is a luxury hotel aimed at the four- and five-star crowds. Prices range from $100 to $500+, with the average around $150-$200 per night. The resort has frequent promotions, however, which offer lower room rates, spa credits and upgrade packages, so check for discounts, especially during the low season. 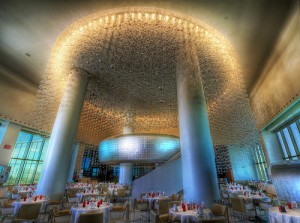 The casino at Mandalay Bay spreads over 135,000 square feet. Guests can try their luck at slots and table games (such as poker and blackjack). There is also a sports book.

Mandalay Bay’s casino doesn’t feel as crowded as other casinos on the Strip, perhaps because it also seems more spread out than others. The casino naturally spreads across the resort without being confined to any specific room.

One of Mandalay Bay’s best-kept secrets is that it is home to some of the best restaurants in Las Vegas. There is a long stretch of nearly a dozen high-end restaurants run by world-class chefs in the resort. Signature restaurants range from steakhouses to seafood with fixed menus and chef specials. Casual dining features Italian, Mexican and Chinese cuisines as well as the resort’s Bayside Buffet. There are also a few places in Mandalay Bay where visitors can grab a snack 24/7.

>>read more about the restaurants at Mandalay Bay Hotel & Casino 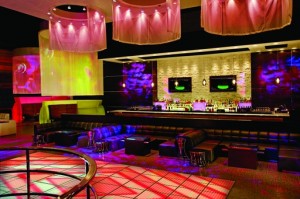 Like the resort itself, the nightclubs at Mandalay Bay don’t get the press like other Las Vegas clubs, but that may be because they aren’t just about rowdy nights on the town. Sure, you can dance the night away, but you can also chill with a nice glass of wine in a luxurious lounge too. Mandalay Bay’s nightlife hangouts are particularly popular with celebrities so you never know when you’ll bump into someone famous.

>>read more about the nightlife at Mandalay Bay Hotel & Casino

There are several venues within Mandalay Bay, each offering excellent entertainment. Mandalay Bay Events Center is where the big-name concerts take place, while the theater features musicals, comedians and Broadway shows. In the summer, there are frequently concerts at Mandalay Beach, the island stage located by the pool. You can count on the House of Blues to provide live music nearly every night of the week.

>>read more about the entertainment at Mandalay Bay Hotel & Casino

Mandalay Bay is not jam packed with things to do, but it is a place where you treat yourself well. The pool area is massive and includes a wave pool and lazy river. Visitors will also find a spa, gym, salon and tattoo parlor at the resort. Mandalay Place, the walkway between Mandalay Bay and Luxor, is filled with specialty shops and restaurants. The most popular activity on site is the Shark Reef Aquarium.

Mandalay Bay Hotel & Casino is a high-end resort out of the action-packed heart of Las Vegas Boulevard, and people who would like to be pampered without the overabundance of foot traffic are wise to choose this resort as their home base while they’re in the city. This resort is also ideal for people who travel to Las Vegas for the food as the fine dining at Mandalay Bay is among the best on the Strip. Music fans will also feel welcomed at Mandalay Bay with the resort’s extensive concert lineup across an array of venues.