What Makes Up CityCenter? 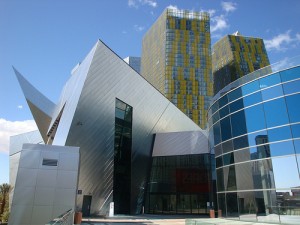 As CityCenter was being built, the city was abuzz about this new multi-building hub on the Las Vegas hub. Unfortunately for CityCenter, it opened in late 2009, right as Las Vegas struggled to draw tourism to the city. Approximately one year later, in December 2010, The Cosmopolitan opened its doors to pomp and circumstance, and any attention CityCenter was riding on seemed to have dwindled.

Nonetheless, in a city where enormity is hardly an anomaly, CityCenter is impressively large. Yet many people are still confused by what, exactly, makes up the multi-use, urban complex spread across 76 acres, which is located directly south of The Cosmopolitan. If you stay at or visit CityCenter, here’s what you can expect to find:

ARIA Resort & Casino is a 61-story hotel and casino, reminiscent of what is found elsewhere on the Las Vegas Strip. The more than 4,000 guest rooms have floor-to-ceiling windows, soaking tubs and HD flat-panel plasma televisions. More than a dozen restaurants are scattered throughout the property, and nightlife is hopping at several bars and lounges, as well as at Haze, ARIA’s nightclub. This is also where Cirque du Soleil’s Viva ELVIS is staged.

Crystals is a luxury shopping area with generally high-end clothing and accessory shops including Gucci, Prada, Louis Vutton and Tiffany & Co. Several restaurants are also located throughout the property including two concepts from Wolfgang Puck and an English Pub by Todd English. On the ground floor, guests will find small gardens, which change seasonally, and a variety of art fixtures. There are several works of art located throughout the entirety of CityCenter. Stop by the information desk in Crystals and ask for the free brochure with the art walking tour of the property.

Mandarin Oriental Las Vegas is but one of several Mandarin properties located around the globe. This property is a 47-story, non-gaming hotel, so most people don’t add it to their Las Vegas itinerary unless they’re staying there. It features both guestrooms and residences, a few restaurants and bars, and an award-winning spa.

Vdara Hotel & Spa is pretty much summed up in its name. This property has nearly 1,500 rooms with large windows and high ceilings. It is smoke-free, non-gaming and is a LEED gold certified building. Guests will find a spa, salon and market cafe on site. Bar Vdara offers a convenient and relaxed place to catch up over cocktails and light fare.

Veer Towers is comprised of two towers in the middle of CityCenter. They house several residencies ranging from studio to three-bedroom penthouses, each offering its own stellar view right in the heart of the Las Vegas Strip.

All of the properties that make up CityCenter are easily accessible from one to the other via skywalk crossings. There is also a tram that runs from Monte Carlo to Bellagio that stops at CityCenter. Nearby pedestrian walkways to The Cosmopolitan and Planet Hollywood make it easier to get around the Strip from the CityCenter complex.