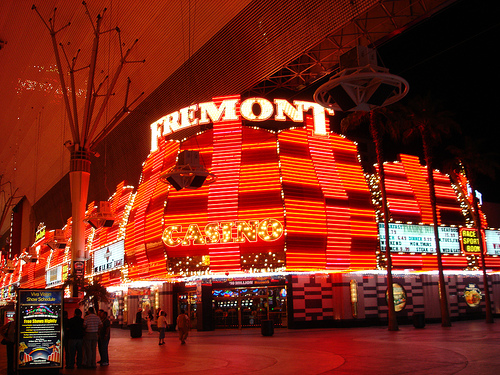 In addition to all of the action going on on Las Vegas Boulevard, otherwise known as the Strip, there are a number of attractions in downtown Las Vegas. Fremont Street, the five blocks located between Las Vegas Boulevard and Main Street, is where you’ll find the “original” Las Vegas in which densely packed casinos, authentic neon signs and fun bars offer diversions for visitors.

It would be criminal to visit Las Vegas and not make at least one quick stop (preferably at night) in this historic district. In many ways, downtown Las Vegas has seen better days, but it packs a lot of fascinating sights and sounds into one small and easily walkable area. 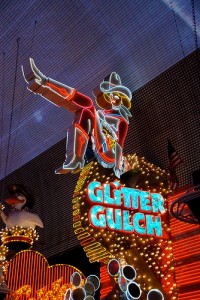 There are several large parking garages in downtown Las Vegas. Rates vary, but most garages allow users to get a validation stamp from participating downtown casinos, so all you really need to do is park, make a quick stop into one of those properties and get the necessary stamp to get out of the parking fee. There is also plenty of valet parking at nearly all of the casinos and hotels.

In 1994 the downtown section of Fremont Street was permanently closed to car traffic and construction on a massive light and sound show begun. At the end of 1995, the Fremont Street Experience debuted as a new attraction for visitors to the lagging downtown area. Every evening beginning at dusk, a light show on the ceiling overhead is played every hour on the hour.

After a major 2004 renovation, the system upgraded yet again to Viva Vision, which features more than 12.5 million synchronized LED lights that create animation and other effects backed by a 550,000-watt sound system. The light show plays along the entire overhead canopy, which covers more area than five football fields. A different show plays every hour, each with a different theme. Stick around Fremont Street long enough and you may see a few of them.

It’s also worth noting that Fremont Street is not just about the light show. There are artists and vendors located up and down the street. One of the newest attractions in this part of Las Vegas is the zip line, which runs from one end of Fremont Street to the other. 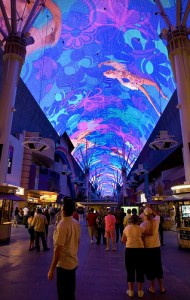 Other Attractions in Downtown Las Vegas

These odd places with loud bells and the constant sound of coins hitting trays are quite an interesting sight compared to the relative calm casinos on the Las Vegas Strip. A few of them offer cheap food items at small fast food restaurants in the back in order to lure potential gamblers through the front door.

This 40-foot-tall neon cowboy still stands over what used to be the Pioneer Club.

At the corner of Fremont Street and Las Vegas Boulevard (the Strip end of downtown), you’ll find this small museum that houses many restored and historic neon signs from Las Vegas’s early days.

There is a thriving, though relatively unknown, arts scene in Las Vegas, and most of it is focused in the downtown area. Galleries, boutique shops and restaurants are just a short walk from Fremont Street in an area bounded by Commerce Street, Hoover Avenue, Fourth Street and Las Vegas Boulevard (at Charleston) and Colorado Avenue. One of the best ways to experience what the arts district has to offer is by checking it out during the First Friday Arts Festival.

The largest and arguably the nicest hotel in the downtown area is the Golden Nugget, with nearly 2,000 rooms and suites. Partly because of its downtown location, it is actually quite inexpensive much of the year, which makes it a great bargain compared to similar hotels on the Las Vegas Strip that charge twice that or more.

There are several other hotels that are decent and can be good value if you like this part of town.

The seediness and low rents in the downtown area have attracted several trendy bars and restaurants, most of them just off of Fremont Street. Though downtown can feel a bit shady at times, it’s not really dangerous if you stay near the highly trafficked parts of town. After all of the over stimulation on the Strip, grabbing a drink downtown can be a relaxing way to spend an evening in Las Vegas.