New York-New York’s newest lounge, Pour 24, officially opens next Monday (November 26th), and they’ve been kind enough to send over a list of the opening beers they will be serving. 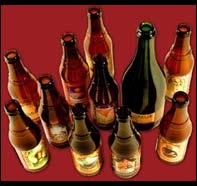 The lounge promises to offer only non-import and non-macrobrewery beers, and from this initial list, it seems as though they are definitely on the right track, though it should be noted that a few could technically be macrobrews (“microbrews” that are actually from major beer companies and not independent breweries), though they are brewed under a separate company name.

What do you think? Can they make a go of serving up options other than Bud and Miller? Are there any brews you think should be added to the list? I personally would love to see them offer more Leinenkugel’s than the Sunset Wheat, which in my mind isn’t the label’s best. Maybe the Berry Weiss or the Creamy Dark.