Toast 7-7-07 With These Special Vegas Cocktails 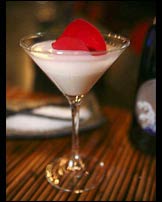 In honor of the luckiest day of the year, three special cocktails have been created to be served to those in Vegas today.

Wolfgang Puck (who coincidentally is getting married today in Italy) and his restaurant group have created a signature cocktail called the Strawberry Hardway, named for the Blackjack hand. It is a blend of Chinaco Silver tequila, fresh lemon juice, simple syrup, fresh strawberries and balsamic crème. The cocktail is $12 and is available at all five of Puck’s Vegas restaurants: Spago and Chinois (Forum Shops at Caesars), Trattoria del Lupo (Mandalay Bay), Postrio (Grand Canal Shoppes at The Venetian) and the Wolfgang Puck Bar & Grill (MGM Grand).

Sushi Roki, located at The Forum Shops at Caesars, has created the Shichi cocktail, named after the seven Japanese gods of good fortune. It’s a citrus flavored beverage made with Hangar One Kaffir Lime vodka, Midori, triple sec, lemon sour, and the juice from 1/2 of a fresh-squeezed lime, all mixed in a shaker and poured into a martini glass. It is then garnished with a 24K gold leaf-wrapped lime and served to you for $12.

Social House at TI is offering the Virtue Martini to its patrons today. It’s made with seven vanilla sugar crystals, to represent the seven virtues, hence the name), then it’s shaken and served in a chilled martini glass with a red rose petal garnish. The price? $7.77

Drink up and toast to the numerically lucky day if you find yourself in Vegas today!