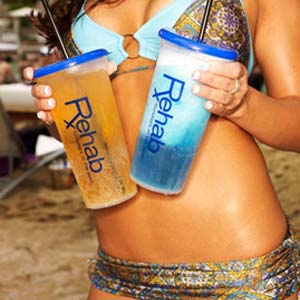 Summer in Vegas has always been hot, but it got even hotter several years ago when the Hard Rock Hotel first introduced a weekly Sunday pool party that they called Rehab.

Years later, despite strong competition from other Vegas resorts, Rehab still remains one of the best reasons to be in the desert during the summer months.

Even though the summer pool parties are over, you can relive the wild 2008 season of Rehab starting this week on the truTV network when it begins airing the all-new reality series, Rehab: Party at the Hard Rock Hotel.

The show follows several of the Rehab staff, including general manager Justin, bartenders Chantell and Christina, cocktail waitresses Kelly and Julia and security staffers including Deebo and the kickass head of security Sharon, as they navigate the wild weekly party and try to keep things running smooth.

Of course, this is Vegas, so anything goes, and when it does (which is often at Rehab), that makes it a perfect match for reality TV.

“Rehab is the equivalent to Babylon,” explains Julia. “It’s pretty much really crazy. People are just having the best time ever here.”

Adds Phil, VP of marketing for the Hard Rock, “We embrace a lifestyle of having fun, letting loose, going crazy, having a good time, spending a bunch of money, and impressing your friends. You’re guaranteed to experience something at Rehab that you have never experienced before in your life. Whether it’s hooking up with a couple of girls, whether it’s bringing your wife here and having a great time that you wouldn’t have at home, whether it’s partying with a celebrity, whatever it is, it’s pretty much guaranteed to happen at Rehab.”

Episode one, which debuts tomorrow (Tuesday, November 11), kicks off with the biggest crowd Rehab has ever drawn, and some pretty big headaches to go with it. Among the issues the staff has to deal with is a girl who wears out her welcome at one of the cabanas, leading to a confrontation with security, and a high roller who skips out on a huge drink tab. 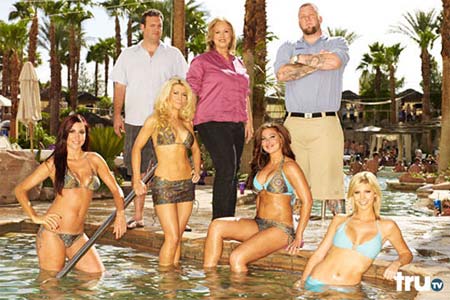 Plenty of hot bodies in swimsuits, high rollers throwing around gobs of cash, wild celebrities, unlimited amounts of alcohol, and the beautiful Hard Rock pool…as the weather turns colder in many parts of the country, this sounds like the perfect show to keep Vegas on the minds of those who watch.

truTV will air Rehab: Party at the Hard Rock Hotel Tuesday nights at 10pm. For more on the show, visit the truTV website, which has been kind enough to lend us the following video clip from episode one to share with you.