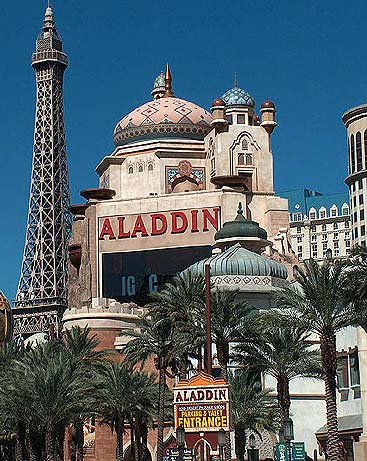 A daylight view of the Aladdin Resort as it sat nestled next to the Paris Las Vegas in September of 2004.

The very first Aladdin opened with an “Arabian Nights” theme on April 1, 1966, and was soon labeled “The Vegas Jinx” as one tragedy after another befell its owners. This last incarnation of the resort opened four years before this photo was taken, after several delays, in August 2000 as a North African/Moroccan paradise on the Strip.

But following the bad luck which had plagued the hotel for over 40 years, the Aladdin was sold to the Planet Hollywood company not long after this photo was taken and was stripped of its theme.

Three years after this photo was taken, the Planet Hollywood Resort opened on the site of the Aladdin.