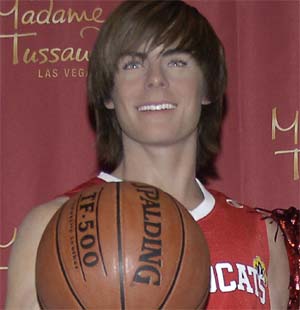 One of the hottest movies of this fall season is sure to be this weekend’s release of Disney’s High School Musical 3 and this week, lead star Zac Efron got waxed in Vegas. But we’re not talking spa treatments here.

On Wednesday, October 22, it was revealed that Efron, who plays basketball team captain Troy Bolton, has become the newest wax figure at Madame Tussauds Museum here in Las Vegas.

Idol and heartthrob to millions of teens world-wide, Efron was measured for his replica earlier this year while on the set of the new Disney movie, which opens today in theaters (unlike previous installments in the series, which debuted on the Disney Channel).

Surrounding Efron’s life-likeness, which is dressed as Bolton in a Wildcats basketball uniform, are team pom-poms and megaphones, allowing fans to get up-close photos as cheerleaders for their favorite star.

“We are thrilled to bring such a stunning figure and experience to the attraction for all the fans of Zac Efron and High School Musical 3: Senior Year,” stated Rosita Chapman, Attraction Manager for Madame Tussauds Las Vegas. “We know he will be a huge hit with fans, just like the movie.”

Unlike other wax figures in the Sin City-location of the museum’s collection, Efron’s will only be in Vegas for a limited engagement before relocating to the new Madame Tussauds Hollywood in the summer of 2009.

Ironically, Efron just turned 21 just four days before the unveiling, making him finally old enough to be in the Vegas casinos. But due to previous movie-related events, the star declined to show at the actual Vegas unveiling of the wax figure, which I think looks a lot like former-American Idol singer Clay Aiken (in the photo at least).

Madame Tussauds Las Vegas is located on the Las Vegas Strip at the Venetian Resort Hotel Casino.
Web Site: https://www.mtvegas.com
Phone: (702) 862-7800
Hours: Open at 10am daily. Closing is usually 10pm, but that varies due to time of year and special events – call ahead for details.
Admission: Adults – $25; Seniors and Students (age 13-18) – $18; Children (age 7-12) – $15; Children (age 6 and under) – free
Discounts: 10% if tickets booked online. Also check with local ticket discount outlets on the Strip, as well as local coupon books, which sometimes offer buy one – get one offers.