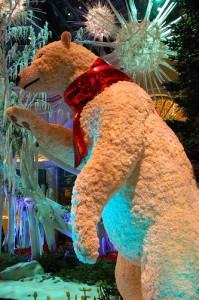 While the rest of the world falls asleep to a world blanketed with snow on Christmas Eve, the sights and sounds of Las Vegas are as alive as ever. Sin City never sleeps, but it does celebrate the holidays in style!

Part of the allure of Christmas in Las Vegas is the buildup to the holiday. Starting in early November, beyond Thanksgiving and throughout the month of December, Las Vegas is awash in holiday celebrations. Expect to find Las Vegas hotels decorated lavishly in lights and ornamentation, and holiday-themed shows and dining selections. The Fountains of Bellagio will dance to holiday music, the gardens in both the Bellagio and Palazzo are outfitted in winter decor, Santa struts his stuff on the catwalk at the Fashion Show Mall and the lights at Fremont Street in downtown Las Vegas are even more spectacular than usual.

Throughout the city, expect to find several events that cater to the holiday season. At the Ethel M Chocolate Factory in Henderson, an on-site desert botanical garden is outfitted in hundreds of thousands of lights. Thousands of people also make their way through the Magical Forest at Opportunity Village, which also includes a passenger train, carousel and visits by Santa Claus. The local ballet company puts on a production of the Nutcracker, and theatre companies put on seasonal performances.

Visiting Las Vegas over the holiday season is particularly popular with those coming from the northern United States and other parts of the world who hope to escape the colder weather. The weather in Las Vegas in winter can be chillier than people anticipate, with temperatures in the mid-50s during the day and dropping down to freezing at night. Windier conditions make it feel even colder.

Because people flock to Las Vegas for the holidays, it’s a good idea to book your accommodations early, especially if you want to stay on the Las Vegas Strip. Most shows in Las Vegas are up and running throughout the holidays (even on Christmas), and nightclubs are open throughout the season as well. If shopping is your forte, look no further than Las Vegas.

On the holiday itself, everything in Las Vegas reaches the holiday peak, though it doesn’t lose it’s Sin City style, which is part of the allure. You can continue to gamble and party as you would any time of the year in Las Vegas, but you can do it surrounded by yuletide cheer during the holidays. Expect to find cocktail waitresses in Santa hats, ivy strung across the poker tables and holiday music playing in the background. Many restaurants throughout Las Vegas, including the buffets, offer special menus for Christmas, which is particularly popular for both visitors and locals. If you have a specific restaurant in mind, make a reservation in advance.