It’s October, so it’s time to get into the Halloween spirit. But why just visit a haunted house, when you can visit a haunted theme park? That’s the idea behind the annual Fright Dome event that takes place at Circus Circus. 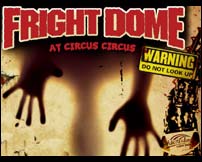 Ranked the “4th Scariest Haunted Attraction in the U.S.” by AOL, Fright Dome takes place on selected nights inside the resort’s Adventuredome. This year, event organizers are upping the scare quotient by adding new thrills and chills.

Fright Dome offers an eerie, fog-shrouded landscape featuring five enhanced haunted houses, including the all new “Cell Block 13” house, along with scare zones and the usual Adventuredome rides. There will also be freak shows by artists such as Lizardman, who has had his entire body tattooed with reptilian scales and his tongue surgically forked like a lizard’s, as well as Lady Diabla, who is known for driving four inch nails into her head and swallowing swords.

But the biggest fright may just drop in on you…literally. New for this year are the Drop Demons, acrobats who will drop from the ceiling at random to frighten those who dare to enter. Ok, I can do haunted houses, but the Drop Demons would definitely spook me.

“Circus Circus has given us the go ahead to make it as scary as we absolutely can. We have never added so many attractions in a single year; people are going to see things this year that will blow their minds,” commented Jason Egan, owner and creator of Fright Dome, of the new additions. “We’re going to the extreme by adding Drop Demons and this year we’re aiming to make Fright Dome the #1 Halloween Attraction in the country.”

Fright Dome starts tomorrow, October 5th, and runs Thursdays through Sundays this month plus the week leading up to Halloween, October 31st. Each of these nights, hours are 7pm until midnight.