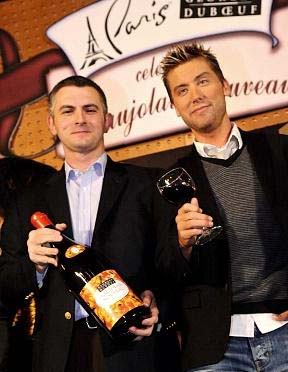 Last night, musician/actor Lance Bass flipped the switch that lit up Paris Las Vegas’ 50-story replica of the Eiffel Tower in a red light. The ceremony was to celebrate the the release of the 2008 edition of Beaujolais Nouveau and kick off a weekend of festivities in Vegas.

As regulated by French law, Beaujolais Nouveau is released for public consumption no sooner than the third Thursday of November, just six weeks after harvest. This year, Paris Las Vegas has partnered with Georges Deboeuf, the number one producer of the wine, to honor the 2008 vintage.

The first cask of Beaujolais Nouveau was delivered to the resort last night via air by Stars and Stripes Air Tours and was received by the official Georges Deboeuf can-can dancers. Along with Deboeuf export director Yann Bourigault, Bass (currently one of the front runners on this season’s “Dancing With the Stars”) flipped the switch bathing the Eiffel Tower in a wine-red light.

Starting today through November 22, sample the 2008 Beaujolais Nouveau at a special bar in the Paris Las Vegas lobby from 1pm until 8pm.

The Eiffel Tower Restaurant will also offer complimentary tastings to the public tomorrow, November 21, from noon to 3pm. Later that evening, Risque nightclub will be the setting for a Rock’n’Roll Wine Beaujolais Nouveau-themed event that will run from 7pm until 10pm. To purchase tickets to this, or for more information, call 702-240-3066.

On Saturday, November 22, the resort’s Les Artistes Steakhouse will host a special Beaujolais Nouveau event featuring tastings of various Deboeuf wines and a special menu created to pair with the selected vintages. Tickets are $30 and can be purchased at the Paris Las Vegas box office or by calling 877-374-7469.