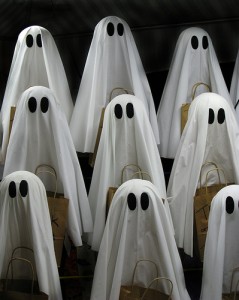 Pull out the devil’s horns, dust off the witch’s hat and prep your blood-curdling scream for the Halloween festivities in Las Vegas for 2010.

Sin City doesn’t hold back when it comes to throwing a party, and throughout the month of October, you can find dozens of bars and clubs hosting costume parties and holding bashes to celebrate the holiday. Some are hosted by celebrities; others are neighborhood-like gatherings. In most cases, Halloween in Las Vegas is something you have to experience to appreciate.

If you’ll be in Las Vegas for Halloween in 2010 (or for the month of October), here are the many places you can check out to get your spook on.

Note: This page will be updated as new Halloween events are announced.

Fright Dome at the Adventuredome, Circus Circus
Open from 7:00 p.m.-midnight nightly
Spread over five acres, the Fright Dome consists of haunted mazes, costumed characters and scary shows. Recommended for those 12 years and older.

Chaos at the Cannery, Cannery Casino
6:30 p.m.-10:00 p.m. Thursday and Sunday, 6:30 p.m.-midnight Saturday and Sunday
Two haunted houses, The Asylum and Hotel Fear, have both been named in the top 13 haunts in the United States.

Bonnie Screams, Bonnie Springs Ranch
Several attractions on the 115-acre ranch, including four haunts and a nightly magic show. $20.00 per person. Tickets for Spooky Town are $10.00 for one adult and one child.

‘Til Death Do Us Apart Wedding Package, Mandalay Bay
Starting at $850.00, couples can be married in a themed haunted chapel and get passes to the Circus Circus Frightdome.

Blood Village at Boca Park in Summerlin
Get scared in six haunted attractions, all for a single price ($22.00 for adults).

Madame Tussauds After Dark, The Venetian
9:00 p.m.-midnight.
Wander among the wax figures, which are interspersed with real people, with only the assistance of a glow stick. The “Scream” attraction is enhanced as well.

Great Pumpkin Run, Anderson Dairy, 801 Searles Avenue
Dress in costume for this 5K walk or run, with all donations going toward Easter Seals of Southern Nevada. Register to run here.

Haunted Tours at Titanic Exhibit, Luxor Las Vegas
8:00 p.m.
Tours of the exhibit that explain some of the strange occurrences on the Titanic and mysterious circumstances since the ship’s demise. Tour is free with paid admission.

Naughty or Nice, Gold Boutique Nightclub and Lounge
10:00 p.m.
$1,000 to the winner of the Naughty or Nice Halloween costume contest.

Haunted Happenings on the Patio, Serendipity 3
9:00 p.m.
Costume contest with $4,000 in cash prizes.

Fetish & Fantasy Halloween Ball, held in three venues (The Joint, Muse Ballroom and Artists Hall) in Hard Rock Hotel & Casino
Begins at 10:00 p.m. – There are three ticket levels and prices vary depending on when you arrive at the party.
Now in its 15th year, this ball is considered one of the hottest parties in all of Las Vegas.

Night of the Killer Costumes, Multiple locations in Palms Las Vegas
$100,000 cash and prizes throughout the resort’s nightclubs and bars.