One would think it would take a black-out of unimaginable proportions to make the Strip go dark at night. 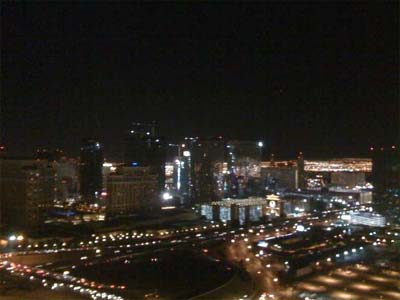 But in an effort to show their commitment to being green, many of the largest casinos and resorts on the Strip did just that on March 28th, 2009, as they participated in the world-wide conservancy effort known as Earth Hour.

Spearheaded by the World Wildlife Foundation, Las Vegas chose to be one of the flagship cities for the event, which started at 8:30pm, when Bill’s Gamblin’ Hall and Saloon was the first to go dim. Bally’s, Paris Las Vegas, Flamingo, Planet Hollywood, Venetian, Palazzo and even the Luxor’s iconic beacon beam of light went dark, one by one.

But it wasn’t just the Strip that went dark.

Downtown, the massive Fremont Street Experience even took part in the event, darkening its multi-block media screen canopy for the hour. Many of the Fremont Street hotels and casinos turned off their exterior lights as well.

Off-Strip, The Rio and several other resorts dimmed their lights. Many Vegas residents took part in the event, as well. Even the “Welcome to Las Vegas Sign” that anchors the south Strip went dark.

For those that missed it, or may want to relive it, Earthhourlv.org has a wonderful photo gallery of before and during shots of the Strip sans lights. You can also follow their archived Twitter feed.

The Las Vegas Sun has a great time lapse slide show of the Strip resorts going dark one by one at its site.

LasVegasVegas.com also has some great street-view shots of the center Strip with the lights out.

I also found this PSA that Flamingo headliners Donny & Marie Osmond did for the event, if you’re interested in viewing it.

I think it’d be interesting to find out how much money the resorts saved for going dark for just the one hour.  I also applaud those that participated, because I think despite the glitz and glamour that most people go to Vegas for, even an hour without the bright lights could save quite a lot of resources.