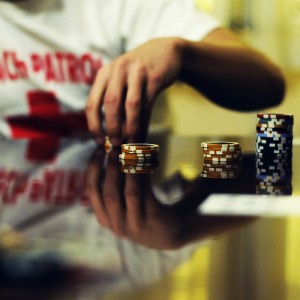 The World Series of Poker is an annual multi-day Las Vegas event that grows in popularity every year. This isn’t about a single hand of poker. Instead, more than 50 tournaments are packed into the World Series of Poker, each with varying buy-in amounts, cash prizes and game restrictions (for example, there’s an event for seniors only and another for casino employees). Hold ’em, H.O.R.S.E., Seven Card Stud … they all have a place here.

Way back in the day, when the first World Series of Poker was held in 1970, six poker players took their place at the table. It took several years for it to catch on with mainstream poker players, but today the tournaments draw thousands of players from around the world. Several celebrities even make an appearance on the casino floor. In recent years, the event has been held at Rio Hotel & Casino. It now spans nearly two months to accommodate the growing number of people and games.

Despite the variety of events that take place across the course of the World Series of Poker, the highlight is the final showdown, a $10,000 no-limit hold ’em tournament, in which thousands of people compete for the biggest prize of the games. The winner walks away with several million dollars, a gold bracelet and the title of World Champion of Poker.

If you visit Las Vegas during the World Series of Poker, expect to find crowds at Rio. If you’d rather watch than play, it may make more sense to find Las Vegas accommodations on the Strip and take a taxi to Rio.

However, if you’d prefer to play, the obvious, convenient choice for lodging is Rio itself. Book a room in advance and expect to pay for the convenience, however the hotel does provide discounts for poker players, and if you have a player’s card, you may be able to cash in some points for a cheaper stay. If you’re looking for nearby, inexpensive accommodations, consider booking a room at Gold Coast. The Palms is a nicer option, with impressive suites and world-class restaurants, but expect to pay for the comfort. Many players also stay at the Bellagio, which is only a couple minutes away by cab.