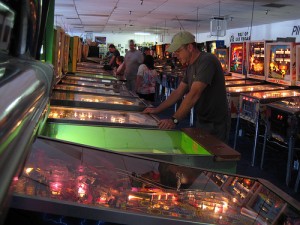 Some people come to Las Vegas to drop coins in slot machines with the hope that they’ll hit it big on the casino floor, but if you want your quarters to go a bit further, consider stopping by the Pinball Hall of Fame.

Located off of the Strip in an unassuming building with a simple banner outside instead of a flashy sign, the 10,000-square-foot Pinball Hall of Fame is a collection of several hundred vintage and new pinball machines. There is no entry fee into the building; the only cost to visitors is the quarters they’ll drop into the machines to play pinball. Older machines cost $.25 to play while newer ones cost $.50.

According to its website, the Pinball Hall of Fame is an attempt by the Las Vegas Pinball Collectors Club to house and display the world’s largest pinball collection. The games all belong to one club member. Many of the older machines have placards on them that provide historical information about the game or a particular machine. For example, guests will find the first pinball machine with plastic flippers in the Hall of Fame as well as several early editions of some of the games.

Visitors are welcome to play the range of games, which range from those created in the 1950s that would be considered politically incorrect today (cowboys and Indians, anyone?) to modern favorites including Star Trek, Avatar, CSI, Dark Knight and Indiana Jones. Games from the 1960s, 1070s and 1980s are most prevalent. Each one has a different design and requires a different strategy. It is not uncommon to find kids bouncing from machine to machine to try their luck while parents recall old favorites before moving on to new discoveries. A few two-person games on the floor let new players try their luck against more seasoned players.

One of the nice things about the Pinball Hall of Fame is that, unlike gambling, everyone is a winner. Some people will hit long, points-accumulating streaks while others will bemoan the loss of a few balls that slip between the flippers with minimal play, but everyone will be able to play and everyone is a winner without spending a fortune. You can choose to spend just a few minutes and a few bucks, or you can spend all day moving from machine to machine playing all of the games. Because the Pinball Hall of Fame is run by a non-profit organization, excess revenues are given to non-denominational charities.