Tournament of Kings at Excalibur 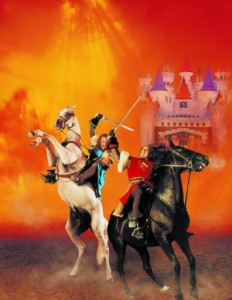 When you walk into the performance space for the Tournament of Kings at Excalibur, the stage is already set for you: A relatively large arena is bathed in a blue glowing light. At the head of the arena is a raised platform, waiting for a king to arrive. Around the arena are four rows of stadium-style seating, each spot set for a medieval meal.

Each section of the arena is a designated cheer zone for a particular knight in the performance. There are seven sections designated as countries (Norway, Ireland, Hungary, etc.), and one section designated as Dragon for the dark knight, the bad guy whom all the other knights have to defeat. At the beginning of the performance Merlin and a court jester show audience members how to toast with their mugs and cheer for their designated knight (“Hazha!”), and it really is incredible how fast everyone gets into the act.

Throughout the show (which lasts a little more than hour), wait staff serve a meal designed to be eaten with your hands. Start out with a bowl of soup, and follow that with veggies, chicken, a roll and dessert … all served without silverware. The food is mediocre, but you likely won’t be paying too much attention to what is on the table in front of you. After all, the highlight of the performance is the show itself; the food just adds ambiance.

Tournament of Kings is fast-paced and colorful, with the knights dressed in head-to-toe period costumes. Their horses are equally as decorated, and everything is color-coordinated with the country banners. The knights joust and participate in stadium games atop their horses. Court maidens dance and sing, flirting with the knights and cheering with the audience.

All the action comes to a head as all the knights band together to defeat the dark knight in a gracefully choreographed sword fight that moves throughout the arena. Fog, smoke and fire explosions accompany the clashing of swords as the knights deliver the final blow to the enemy.

Tournament of Kings has been touted as one of the best family friendly shows in Las Vegas, and rightly so. From the moment this interactive show begins, audience members are swept up in cheering, dancing, singing, eating, dining and toasting. Kids will love the action and raucous fun—there’s no need to sit still here! Parents will love the medieval authenticity, lights, costumes and attention to detail.

Performance times for Tournament of Kings are Monday and Wednesday at 6:00 p.m. and Thursday through Sunday at 6:00 p.m. and 8:30 p.m. Admission includes a three-course dinner. If you prefer to skip the meal, you may do so at a discounted price, but you must purchase your tickets at the box office. Children of all ages are welcome into the show. Potential audience members should be aware that the show features horses, pyrotechnics, strobe lights, smoke and fog effects in an enclosed area.

>>Buy tickets for Tournament of Kings.