Jenny McCarthy to Deal Cards as a Playboy Bunny 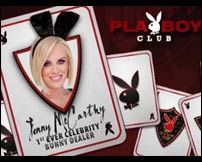 Yes, you read that right. actress Jenny McCarthy will be donning the Bunny Dealer’s uniform of the vintage black costume with white collar, cuffs and cottontail to deal cards at the Playboy Club in Vegas.

As a former Playmate of Year, and as the former host of the E! reality show “Party at the Palms,” it seems only natural that when the Playboy Club at the Palms decided to have its first celebrity blackjack dealer, they would turn to McCarthy.

She will reportedly go through a “rigorous training process” that will include custom costume fittings, dealing school, shuffling eight decks of cards and pitching from a shoe.

“We are honored to have Jenny McCarthy as our first celebrity Bunny Dealer. She is an icon and great representative of the Playboy brand and I couldn’t think of a more perfect fit,” said Palms owner George Maloof, a friend of McCarthy.

She is scheduled to hit the blackjack tables on August 4th, from 9pm until midnight at the Playboy Club atop the Palms’ Fantasy Tower. Normal cover charge of $30 applies, but it also includes admission to Moon.