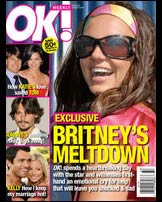 Hot on the heels of her current controversy involving an alleged meltdown on the set of an interview and photo shoot with OK! Magazine, Britney Spears arrived in town for what she probably hoped would be another wild weekend of partying.

But shortly after she arrived at the Wynn yesterday with her children, nanny and bodyguards in tow, one of those bodyguards got physical with a paparazzi photographer. According to TMZ.com, Brit’s guy had to be pulled off the cameraman by Wynn security, and they have the photo to prove it.

According to a press release from the Las Vegas Police Dept., officers responded to a call at 11:55 am at the Wynn and after investigation, issued a citation against the bodyguard, Julio Camera, for misdemeanor battery.

They then state that Spears has also filed an allegation of battery on behalf of one of her sons, Sean Preston. It seems she is claiming that the child was “battered” by the photographer, though onlookers are claiming he accidentally bumped into her son, and it was that incident that reportedly set Camera off. The police say they are still investigating both incidents.

All this and then word got out that the lawyer of her husband Kevin Federline was trying to get her to return to Malibu because she took the children out of state without permission from K-Fed. That is a big no-no according to the court agreements in place for their shared custody of the children.

Spears, who reportedly is in town to attend Fergie’s concert at the Palms this weekend, has checked out from the Wynn less than twelve hours after arriving. There are also conflicting reports on whether the Wynn asked her to leave or she left voluntarily.

According to Robin Leach, Steve Wynn himself reportedly ordered Spears out after the fight in his hotel. The Wynn resort isn’t commenting, saying they do not talk about their guests.

At any rate, it’s about T – 30 days until Spears is scheduled to open the new LAX nightclub at the Luxor. Let’s see if she can keep it together until then.