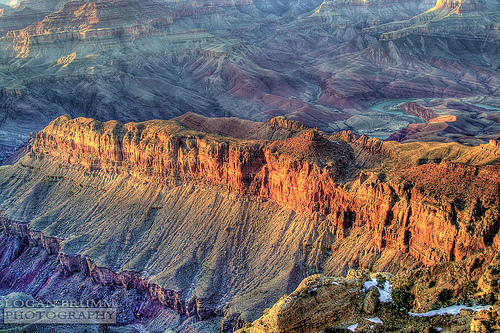 Though the Grand Canyon isn’t exactly close to Las Vegas, it is arguably the nearest must-see-in-your-lifetime site to the city. As a result, thousands of visitors make an attempt to squeeze in a trip to the Grand Canyon when they visit Las Vegas, especially if they’re in town for three days or more.

The Grand Canyon is a massive fissure in the ground, and, as such, you can’t visit both sides in a single day. In fact, visitors can check out the West Rim, South Rim or North Rim, but each offers its own challenges and considerations. For many, popping into the park and peeking over the edge is more than sufficient, but for others, a longer stay offers an opportunity to explore hiking trails and admire the canyon from a variety of angles.

The West Rim is the most logical point of entry for the Grand Canyon if you’d like to take a day trip. Located approximately 125 miles away from Las Vegas, this tightly regulated part of the Grand Canyon has strict guidelines regarding visitation. Nonetheless, its manageable location makes it a popular destination for visitors to Las Vegas.

What is there: The West Rim is the site of the popular Skywalk, the clear walkway that goes out over the canyon offering jaw-dropping views directly below your feet. In addition to the famed Skywalk, there is a hop-on, hop-off shuttle that offers viewing opportunities at three viewpoints.

Where it is: The Skywalk and West Rim entrance are located in the Hualapai Nation, which means this is not part of the National Park Service like the South and North Rim are. You can not find directions on Google Maps or using a GPS, so you’ll need to note the directions on the West Rim website before leaving for the drive. You must park at the Grand Canyon West Airport and utilize the shuttle in the park. Cars are not allowed at any of the points of interest without a disabled parking permit. The road into the West Rim is a rough dirt road, so many people choose to park at Meadview, about an hour away from the Skywalk, and take a shuttle bus in.

Entrance fee: To enter the West Rim, you need to purchase a permit and Legacy Tour Package, which starts at $29.95 per person plus taxes and fees.

What is there: The South Rim’s main highlights are fairly accessible to the casual visitor. Several self-driving and shuttle bus routes follow the edge of the rim, offering picturesque vistas from several different viewpoints. In addition, there are other attractions such as Grand Canyon Village, Hopi House and Lookout Studio.

Where it is: Ambitious travelers can set out for the South Rim early in the morning from Las Vegas and arrive back in the city late the same evening. This is a long day trip and requires a nearly 600-mile round trip, but if you have a rental car or are on a guided tour, it is more than possible, though most visitors are usually exhausted after such a long day in the car and wandering up and down the South Rim. To get to the South Rim, visitors must drive out of Las Vegas on I-93 into Arizona, turn east on I-40 at Kingman, turn north on AZ-64 and follow signs from there.

Entrance fee: Because this is part of the National Park Service, it costs $25.00 per vehicle for seven days. This also includes admission into the North Rim.

While 90% of the visitors to the Grand Canyon are crowded onto the South Rim, the remaining 10% are enjoying the peace and quiet offered by the North Rim. Though some people say the views of the South Rim far outweigh what is found on the North Rim, many people who have visited the North Rim say they’d never go back to the South Rim after discovering a more peaceful way to explore this natural wonder.

What is there: Whereas the South Rim is much more accessible for the casual visitor, the North Rim is teeming with longer hiking trails and more densely packed trees. There is a scenic drive with a variety of viewpoints as well as a historic lodge with a veranda that sits right on the edge of the rim. Due to snowfall, the North Rim is closed in the winter.

Where it is: If you want to visit the North Rim, you’ll need to make it an overnight trip. The distance to the North Rim is about the same as it is on the South Rim (nearly 300 miles one way), but you can’t drive as fast on the roads leading toward the North Rim as you can to the South Rim. To reach this side of the Grand Canyon, head north out of Las Vegas on I-15, take the exit for the Grand Canyon near St. George, Utah, and follow the signs into Kaibab National Forest.

Entrace fee: Because this is part of the National Park Service, it costs $25.00 per vehicle for seven days. This also includes admission into the South Rim.

>>More information on getting from Las Vegas to the Grand Canyon.

Though travelers can make the trip to the Grand Canyon’s West Rim and South Rim in a single day, a more tolerable travel approach may be to consider an overnight stay. On the South Rim, there are plenty of hotel rooms in the Grand Canyon Village, and on the North Rim, you can stay in the lodge. The hotels inside Grand Canyon National Park are quite expensive and are very crowded between late May and early September, but there are plenty of cheaper places just before you get to the park if you’re driving in on the south side. You should definitely make a hotel reservation before you set out. There are plenty of cheaper hotels in Flagstaff, and many people do stay overnight there because it’s close enough to drive back and forth to the canyon a couple of times.

Flights to the Grand Canyon from Las Vegas

If you’re not keen on driving all the way to the Grand Canyon, or if you’re in a hurry, several companies offer scenic flights on small planes and helicopters leaving from Las Vegas that fly over and through the canyon and then return directly to Las Vegas. The shortest and cheapest ones can be done in just a couple of hours, including transportation to and from your hotel. These start at around $150.00 per person, but there are often discounts or coupons that pop up for these excursions. Helicopters are quite a bit more expensive, but they offer more versatile views. There are plenty of other add-on options available with these flights as well, such as lunch at the bottom of the Grand Canyon or a stop at the Hoover Dam. Explore your Las Vegas tour options to decide which is right for you.