As we posted last year, the volcano at The Mirage is undergoing a multi-million dollar renovation, with plans to debut the new show at the end of this year. As the date draws near, The Mirage is going interactive with updates. 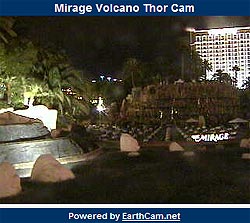 Newly opened is a blog on the renovations as they near completion. I’m not sure why MGM Mirage has chosen to host it on Blogspot, but the Volcano Blog currently has a few updates and a really cool webcam feed live from the volcano. If you really want to see the construction on a daily basis or just peek in from time to time, this is a great site to bookmark.

Speaking of video, The Mirage currently has a video on the resort’s website that focuses on the recording of the new music that will be used for the volcano’s nightly shows. The video follows the Grateful Dead’s Mickey Hart and Indian tabla player Zakir Hussain, as they record the tracks, which have a decidedly world music percussive feel to them.

“To put percussive sound to the image of fire and have it dance around a lagoon is something I’ve never done; I’ve never birthed a volcano,” said Hart, in the video. “Zakir and I immersed ourselves in the legends and myths and studied what really makes a volcano work. The result, a true union of the senses, will rattle your bones, just like a real volcano.”

To go along with the new soundtrack is the addition of an updated sound system featuring over 60 Meyer Sound cabinets placed throughout the lagoon.

All of the volcano’s $25 million in renovations are being overseen by WET, the firm responsible for the Bellagio fountain’s amazing shows, and they are using their water technologies to enhance the lava show using something they are calling “FireShooters.”

The FireShooters were designed especially for The Mirage volcano and are said to be able to shoot massive fireballs more than 12 feet in the air. There will reportedly be over 120 of these in use, which will also help direct the lava flows of the volcano as it erupts, as well as allow flames to dance upon the waters of the lagoon.

Also at the resort’s website is a link to the attraction’s Facebook page, where The Mirage is sponsoring a contest to win a trip to Las Vegas to view the grand re-opening of the volcano, which is currently set for December 2008.

Once it reopens, I’m told it will light up the Strip with a 4-and-a-half minute show every hour after dark. When we get word on the exact date the volcano goes live, we’ll let you know.

In the meantime, here’s an artist’s rendering of the new volcano show, courtesy of MGM Mirage: 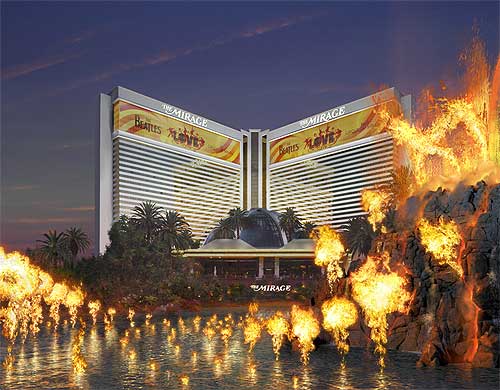