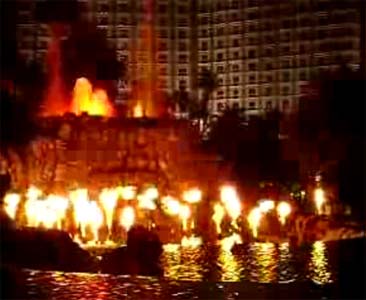 Those who have passed by The Mirage in the past few months may have noticed the iconic volcano out front has been silent. But come this Monday, expect the rumblings on The Strip to start up again.

After $25 million in renovations, the new version of the volcano is set to come to life on Monday, December 8.

Overseen by WET, the company behind the amazing Bellagio fountain show, the new show at The Mirage will feature everything from specially designed Fireshooters to new music composed by the Grateful Dead’s Mickey Hart and Indian tabla player Zakir Hussain blaring out of a state-of-the-art sound system.

Fans of the free Strip attraction have been able to track the construction updates via a blog run by The Mirage, which included a live webcam. But during Thanksgiving weekend, the resort did a test run of the new volcano show. After some searching, I was able to locate some video on YouTube of this.

So, if you can’t make it to the grand opening on December 8, here’s a taste what to expect:

What do you think of it? I imagine it looks even more amazing up close.

WET Design has also put together a promotional video for the volcano. And while it doesn’t really show more than random clips, it does offer a taste of what the new soundtrack sounds like and how it adds to the visuals of the fire and lava.

More interested in the audio than the visuals? The Mirage has also released this footage of the Hart and Hussain creating the new soundtrack:

If you get a chance to see the new incarnation of The Mirage volcano, leave us a note in comments with your thoughts and reviews. Let us know if you think it was worth the $25 million price tag.