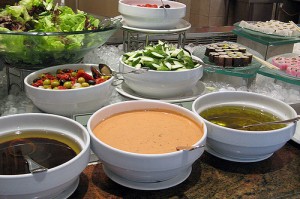 With all of the dining options available in Las Vegas, it can be hard to decide where, exactly, to go for your next meal. It’s in those moments of weakness that the elusive Las Vegas buffet tempts visitors.

The problem, of course, is that there are so many options when it comes to choosing the right buffet, and, admittedly, they can be a bit pricey. If you’ve got the means and don’t mind something middle-of-the-road, you might want to consider hopping over to Palace Station, which is located on the west side of the Las Vegas Strip on Sahara Avenue.

Some buffets in Las Vegas offer a variety of stations, which feature custom-made omelets, certain ethnic foods, carving stations and the like. Though Palace Feast Buffet does offer a touch of several types of food, this isn’t where you’ll find the highest quality meats, a surprising array of dishes or the most extensive choices of fruits and vegetables. The selection of food is large, though not nearly as vast as some of the newer, more popular buffets in town.

It’s worth noting that, like many of the Station Casinos in town, Palace Station doesn’t have a theme like many Las Vegas hotels, so if you’re looking for a memorable dining atmosphere, this probably isn’t the place for you. Instead, the Palace Feast Buffet has a relatively small dining room, worn in booths, old school diner decorating and no particular design appeal.

So what does Palace Feast Buffet have going for it? First of all, it’s out of the limelight and laid back, which means that, if you want to slum down to breakfast hungover in your sweats, you can. This isn’t the place in Las Vegas where you need to dress to impress. Also, because it’s tucked slightly off of the Strip, the wait time to get into the buffet has the potential to be significantly shorter than at some of the more visible ones on the Strip, which is saying a lot, especially during the Sunday morning brunch rush (of course, you’ll need a taxi to reach it if you aren’t staying at Palace Station yourself).

The service at Palace Feast Buffet is noteworthy. Though wait staff won’t stick around long enough to chat, they are prompt, tentative and efficient. Dishes don’t stack up on the table, and items on the buffet are quickly replaced when needed. Though the food items aren’t necessarily anything special, everything is hot and fresh.

Finally, one of the most appealing components of the Palace Feast Buffet (and any buffet offered through the Station Casinos family) is the price. Expect to pay about half of what you would at one of the larger, more commercialized buffets on the Strip. Pop in for a player’s card before you get in line to dine in order to save even more money.