The caliber of entertainment at Caesars Palace is normally top notch, but this week, the bar gets raised when the resort plays host to the third annual Comedy Festival. 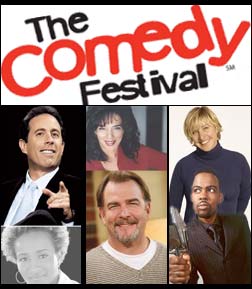 The event runs Wednesday, November 14th through Saturday, November 17th, and is highlighted by both back-to-back Colosseum shows from Jerry Seinfeld and Chris Rock, as well as a headlining show by Ellen DeGeneres. Overall, the four-day event will feature multi-artist performances, tributes, stand-up and sketch comedy, and televised special events, taking place in a variety of venues throughout Caesars Palace.

Steve Schirripa (“The Sopranos”) opens the festival on Wednesday with “Vegas Va-Voom,” and the Festival Village, where festival goers can meet celebrities and participate in interactive events to win prizes, opens.

Thursday is headlined by DeGeneres’ “Ellen’s Really Big Show,” which is her ode to variety specials of the past. It will be recorded for broadcast on TBS on November 19th. Also performing in other shows that night around the resort will be Frank Caliendo, whose “Frank TV” series debuts November 18th on TBS; Steve Byrne (winner of the Sierra Mist Stand Up or Sit Down Comedy Challenge), Bobby Lee (“Mad TV”), Dr. Ken Jeong (Knocked Up) and Kevin Shea (“Comedy Central’s Premium Blend”) as “The Kims of Comedy”; Zach Galifianakis, Brian Posehn, Reggie Watts and Mike O’Connell in “The Return of Weirdo and Beardo with Friends Afro and Mike-O”; and a midnight show by Howard Stern’s right-hand man Artie Lange.

Friday, November 16th, sees Jerry Seinfeld headlining a show at The Colosseum, followed by Chris Rock. Elsewhere on property, Nick Cannon returns with his improv show “Wild ‘N Out”; Bill Engvall hosts “Blue Collar Comedy: The Next Generation”; and Jamie Kennedy and Nick Swardson take the stage together, as do Chelsea Handler and Jim Breuer. Russell Simmon’s “Def Comedy Jam” also takes the stage for a live filming for the HBO series, and in a separate show, the festival will award somebody the Andy Kaufman Award for the comic who most embodies the spirit and originality of the legendary zany comedian.

The festival closes on Saturday with another back-to-back shot of Jerry Seinfeld and Chris Rock, in separate shows, along with Wanda Sykes doing her own show. Also on the schedule is “Left, Right and Blue” starring John Oliver, Bill Burr and Marc Maron in a politically themed comedy show; Joy Behar (“The View”) and Kevin Nealon do a joint show; and my man Eddie Izzard headlines a performance debuting his new show.

Throughout the entire festival, The Emperors Showroom will play host to up-and-coming comedians and performers, along with The Lucky 21 nationwide comedy talent search finals.

Tickets are available for individual shows priced at $36 to $68, except for Seinfeld, who is asking $75 and $100 for his tickets, and Rock, who is asking even more for his at $86 and $159. There are also several packages in conjunction with Caesars Palace that not only include tickets but other amenities like admission to the Qua Baths & Spa at Caesars and admission to Pure nightclub. These range in price from to $150 up to $3,500 per person.

For more information on the festival line-up, or to purchase tickets online, visit the official website at thecomedyfestival.com.