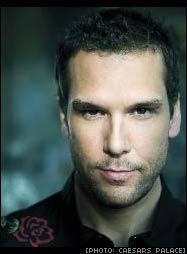 Energetic comedian Dane Cook will take a break from the acting world Memorial Day weekend when he arrives in Vegas to perform at the Colosseum at Caesars Palace.

The last two years, Cook has seemingly exploded out of nowhere to headline national tours, star in box office hit films, appear in various HBO comedy specials plus a nine-part comedy documentary series called Tourgasm, and rule the top of the Billboard charts with comedy CDs and DVDs. He was even named Time Magazine’s “100 Most Influential People.”

The reason for his comedic success lies in his combination of physical comedy, clever wordplay and quirky observations about human behavior and the world around him. He acts like the guy-next-door who says the things we’re thinking. And of course, ladies are won over by his looks, too.

Cook plays an 11pm show all three nights of the weekend — Friday, May 23 through Sunday, May 25 — and seats range from $75 to $175. Tickets are available for purchase at the Caesars Palace box office and via Ticketmaster.

For more on Dane Cook, visit DaneCook.com or myspace.com/danecook to view clips from his various tours. I’m actually bummed I’ll be missing these shows — his “Vicious Circle” HBO special has to be one of the funniest comedy performances I’ve seen in years.

He rose to fame as a supporting cast member of “The Drew Carey Show” and for the last three years has hosted the “Late, Late Show” on CBS. He’s also appeared in countless movies and even authored a best-selling noel, “Between The Bridge and The River.”

But for Scottish-born comedian Craig Ferguson, stand-up comedy has always been his first love.

This summer, from July 24th through 30th, Ferguson will take the stage at the MGM Grand for the first time for a week of live performances.

Showtimes for Ferguson’s appearances are at 9pm nightly, with tickets priced at $60 per person. Purchase them at the MGM Grand box office or via Ticketmaster.