You’d have to be living under a rock not to have heard about the kerfuffle between NBC and Conan O’Brien regarding his all too short hosting stint as the host of the long-running late night talk fest, “The Tonight Show.” As part of his exit contract, O’Brien is prohibited from appearing on TV until September 2010.

So O’Brien decided if he couldn’t reach the fans via TV, he’d take the show on the road. On the morning of March 11, 2010, O’Brien announced via his Twitter account that he would be heading out to do it all live: 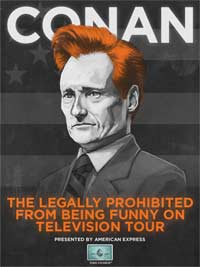 “Hey Internet: I’m headed to your town on a half-assed comedy & music tour,” he Tweeted.

Luckily for Vegas, one of the stops on his upcoming “Legally Prohibited From Being Funny on Television” tour is at The Pearl at the Palms. The date will be May 1, 2010, with a start time of 9pm.

Joining him on the road will be his talk-show sidekick, Andy Richter, as well as his former “Late Show” and “Tonight Show” band, the Max Weinberg 7 (though Weinberg himself has not been confirmed as being on the tour).

General reserved seats for the one-night only appearance are $75, $100 and $150. They are available via Conan’s Team Coco website, The Pearl box office, or via Ticketmaster.

There are also three special packages:

The Palms also has their own concert package. For $599, you get two nights in a palms deluxe room (April 30 check-in/May 2 check-out), two premium tickets to O’Brien’s show, a $50 dining credit, two VIP nightlife passes, two spa entry passes and $10 free slot play (for new club members only). You can book this online directly with The Palms.

According to the press release the tour “promises to be a night of music, comedy, hugging and the occasional awkward silence.” Sounds like a can’t-miss show for fans of Conan O’Brien!