Grammy-nominated recording artist Daughtry will be in Las Vegas next month to perform a live acoustic charity set at The Beatles Revolution Lounge at The Mirage on Sunday, April 13. 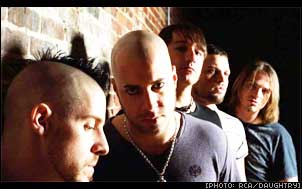 Only two hundred tickets are currently available for this rare club performance and they are all being auctioned off on eBay through March 31st. All proceeds from the tickets will go to the ONE Campaign to fight the emergency of global AIDS and extreme poverty.

As of this article, the highest bidder price is currently $37.50, which is a great price to see this band, which regularly sells out arenas for twice that price.

Daughtry is the self-titled band led by former “American Idol” contestant Chris Daughtry. He may have been voted off early, but after releasing his debut album last year, quickly sold over seven million copies of it and it became the number one selling rock cd in the U.S. The band is getting ready to enter the recording studio for their sophomore cd, but are happy to take the time out to do this intimate show.

“We are really excited about this acoustic show at the Revolution lounge. It is a chance to share a special evening with our fans and raise money for a great cause, ONE.org,” says Chris Daughtry of the event.

Portions of this special performance will be made available for fans to enjoy on demand at Rhapsody.com/Daughtry and on RollingStone.com.

But if you want to be there in person, head over to ebay.com/daughtry to place your bid. The auctions end at 7pm on March 31st.