In 2001, country music legend Garth Brooks announced he was retiring, and aside from a few select gigs, has pretty much kept out of the limelight to stay home with his wife, country superstar Trisha Yearwood, and their family. 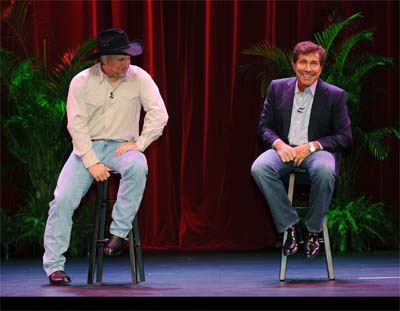 Yesterday (October 15, 2009), Brooks, with Yearwood in the audience looking on, held a press conference with Vegas hotelier Steve Wynn to make a formal announcement that he was coming out of retirement to play at the Encore at Wynn Las Vegas.

Wynn looked on as Brooks explained why he had chosen now to return to the stage, as well as how Wynn had managed to convince him to play the Encore for a special five-year engagement.

“I told him he couldn’t afford me,” joked Brooks at yesterday’s press conference.” I was wrong.”

It seems that Wynn and Brooks came to an agreement that for the next five years, the music icon will play select weekends at the resort that will allow him to bring his enormous catalog of hits to his fans live again. And with the weekends only schedule, he can play here in Las Vegas, yet still maintain a home-life back in Oklahoma.

“Steve Wynn has done what I thought was impossible. He has given me a chance to sing again for the people, while at the same time never missing a day with my children,” explained Brooks. “I am naturally nervous, but it feels good to be out from under the low ceiling of ‘retirement’ I put on myself.”

In a string of five weekends this winter, Brooks will start playing the Encore Theater. The confirmed dates are as follows:

Concert times will be nightly at 8pm, with a bonus show of 10:30pm on the dates that fall on Saturdays, for a total of four shows during each weekend’s engagement.

Tickets are priced at $125 (with service fees and taxes, that should come out to $143 per ticket). There is a 6-ticket per order/person/credit card limit to ensure everyone gets a fair shot at purchasing tickets.

These first run of shows will go on sale Saturday, October 24, 2009 at 8am (PT). They may be purchased this first date of sale only at the Wynn box office online or via phone by calling 702-770-7469. After October 24, tickets may also be purchased at the resort box office in person.

“Everything about Garth’s performances—his artistry, the range of his voice and connection with his audience—is something that I haven’t seen since the Rat Pack. In show business, for a single performer to lift an entire audience emotionally to the point where they pray it doesn’t end, is an extraordinary and unique thing that only a few gifted people can do. But that is what I experienced when I saw Garth on stage, alone with his guitar, doing a history of his personal journey in music. I watched a man create instant love in real time, right before my eyes. Now we have the privilege at Wynn and Encore in Las Vegas to share this extraordinary, intimate experience with everyone,” said Wynn.

Having seen Brooks three times on his last major arena tour before retirement, I can say he puts on an amazing show live. This chance to see him perform in concert in the more intimate confines of the Encore Theater will be a true treat not just for his fans, but for lovers of music in general.

Thanks to the Wynn Las Vegas for the above photo.