As a resident of Las Vegas, tennis superstar Andre Agassi believes in giving back to the city, most notably via the Andre Agassi College Preparatory Academy and his annual Grand Slam for Children Benefit Concert.

This year marks the thirteenth year of doing the benefit, and the line-up announced for this year’s event spans several generations of music. 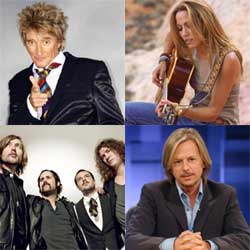 Returning for this year’s event will be legendary rocker Rod Stewart, who in his several decades in the business has lent his distinctive vocals to everything from all-out rockers to classic standards. He has also won many accolades including Grammys and slots in both the Rock and Roll Hall of Fame and the UK Music Hall of Fame.

Another return headliner is Sheryl Crow who has been a chart topping musician for almost two decades. She, too, has won numerous awards including Grammys and American Music Awards.

Also on the bill is Las Vegas’ own The Killers, who in a few short years have become one of America’s most popular and critically-acclaimed bands. Their third studio album, Day & Age, will be released in November

Though not as musically-inclined, comedian David Spade will be taking the stage during the concert, sharing some of his humorous cutting observations about the world of celebrities and whatever else has drawn his ire.

Since its inception in 1995, the Grand Slam events have raised more than $70 million for charity, most of that staying within the Vegas community.

This year’s benefit will take place on Saturday, Oct. 11 at Wynn Las Vegas and begins at 6:30pm.

The bad news is that because the event is being held in a ballroom setting instead of an arena setting, as in previous years, concert-only tickets are not an option for this year. If you wish to attend, you must purchase an entire table, which includes admission and table seating for ten, a cocktail reception, gourmet dinner, gift item, and a live auction.

There are currently three levels of table “sponsorship” available, starting at $17,500 for gold level, then increasing to $40,000 for platinum and $85,000 for diamond. The platinum and diamond levels also include a private VIP event on October 10th (the night before) featuring entertainment from James Taylor and John Ondrasik of Five for Fighting.

For more information on the event or sponsoring a table, please call 702.227.5700 or visit Grand Slam website.