Jimmy Buffet To Party This Fall at the MGM Grand Arena 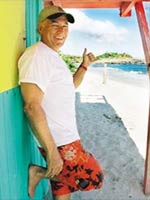 Attention Vegas-bound Parrotheads! You might want to make sure your travel dates coincide with October 20th and 27th. Why? Because that’s when Jimmy Buffet will be taking the stage at the MGM Grand Arena for a two-night party.

Buffet has had many hits over his career, such as “Cheeseburger in Paradise” and the ever classic “Margaritaville,” but he scored his second consecutive #1 hit on the Billboard Country Chart with the release of his current studio record, Take The Weather With You. Selling over 120,000 copies in its first week, it also debuted at #4 on the Billboard Top 200 Chart. It was certified Gold after less than three months.

He’s currently playing select dates to support his recently released cd, Live at Texas Stadium, which features many of his hits, along with live duets with Alan Jackson and George Strait.

No word if Buffet will utilize his Margaritaville restaurant at the Flamingo to host any Parrothead parties in the week between the two MGM Grand Arena dates, but I’d say it’s a good bet he will be showing up unannounced at his restaurant just to hang sometime during that week.