Whenever Madonna takes the stage, you know you’re in for a memorable show. Judging from early reviews, her current “Sticky & Sweet Tour” is no exception. She’s wowing the European audiences with this tour, which is in support of her new #1 cd Hard Candy. 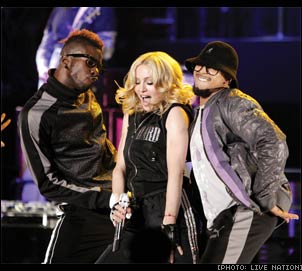 Her tour doesn’t hit North American shores until late fall, but thankfully, one of the few dates is a stop at the MGM Grand on November 8.

The “Sticky & Sweet Tour” is directed by Madonna’s longtime creative collaborator Jamie King, and draws its set list from both the singer’s current CD – her 11th studio recording since she burst on the scene in the 80s – and her twenty-five year history of chart-topping singles.

She shows no signs of slowing down either. Earlier this year, in addition to scoring yet another smash single with “4 Minutes,” which was co-written and co-produced by Madonna, Timbaland and Justin Timberlake, the pop icon was also finally inducted into the Rock and Roll Hall of Fame for her many contributions to music history.

Though it’s not officially on the MGM Grand calendar yet, tickets for the November 8th Las Vegas show will go onsale at 10am on Saturday, May 31 at the MGM Grand box office and online via Live Nation and Madonna.com. Tickets will be priced from $55 to $375 (plus tax) and there will be a limit of 4 tickets per person. Citi credit card members will also have access to presale tickets beginning next Tuesday, May 13, via Citi’s Private Pass Program.

Additionally, all ticket buyers will receive a free trial one year membership to her online fan club, Virtual Icon, which will provide access to rare photos, contests, news and a social networking community dedicated to Madonna.

Considering her last tour in 2006 was the highest grossing tour of all time by a female artist, with tickets selling out in a matter of minutes, I highly recommend you get them as soon as they go on sale. Otherwise you”ll miss a show that might even get Vegas talking the day after.