Motley Crue to Close The Joint at the Hard Rock

The Joint at the Hard Rock has played host to a long list of great entertainment since it first opened in February 1995. However, fourteen years in Vegas is practically old age, and it’s time for a facelift. So next month, the Joint will close its doors for a complete overhaul. 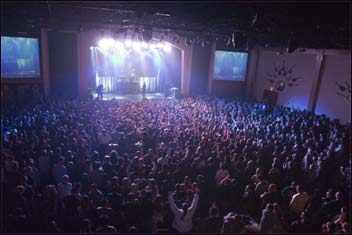 To usher out the venue in a style fitting its location at the Hard Rock Hotel, legendary rock band Motley Crue will bring their Saints of Los Angeles Tour to the venue for two shows on February 6 and 7, 2009. Opening will be a band called, ironically, The Last Vegas.

“The Joint has played host to some of the world’s greatest rock bands over the years and Motley Crue is honored to be closing [it] down,” says drummer Tommy Lee. “We hope to bring the house down in true Crue-style.”

I expect these shows to get even more wild than a normal Crue show since the band doesn’t have to worry about repairing anything that gets damaged.

When the Joint reopens in April 2009, it will be twice the size, including the addition of seven VIP hospitality suites. Over 700 fixed stadium-style seats will be installed and the floor will remain open to allow the venue to transform it from a general admission SRO area for concerts to a space large enough to better accommodate sporting events that require rings and other special equipment in the center of the crowd, like boxing or mixed-martial arts.

Of course, it wouldn’t be a revamped concert venue without the addition of a new state-of-the-art light and sound system, as well. AEG Live will continue to operate as the Joint’s exclusive promoter and booking agent.

Tickets for closing weekend with Motley Crue are priced at $97 and are available at the Hard Rock box office or Ticketmaster.

The Hard Rock Hotel & Casino is currently undergoing an $800-million expansion project, which will add over 800 guest rooms to the resort, including an all-suite 15-story tower, with a completion date set for the end of this year.