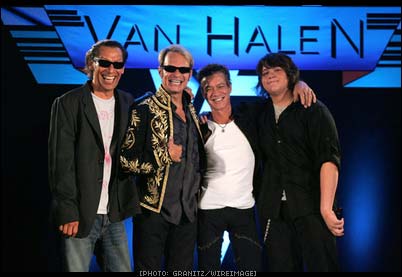 When the semi-reunited Van Halen announced their first round of dates earlier this summer, people were aghast at the fact there were no Vegas dates. Ok, so maybe only I was aghast…but the fact remained that Vegas was not on that list.

Not any more. Just yesterday, the MGM Grand announced that Van Halen would be playing not one but two shows before the end of the year. Can you say whoo-hoo? I knew you could.

VH will be performing on Friday, December 28th and Sunday, December 30th at the MGM Grand Garden Arena. Tickets go on sale via Ticketmaster and the MGM Grand box office next Saturday, October 6th at 10am (that’s Pacific time for any out-of-towners interested in going).

Individuals who have the Citi® / AAdvantage® card, the official credit card of the tour, will be offered access to purchase preferred seats to both shows. Fans can also enjoy the ultimate Van Halen experience including concert pre-show parties, backstage access, premium seating and more via ILoveAllAccess.com.

Ticket prices for each of the two shows will range from $68.25 for the nose bleeds to $183.75 for seats closer to the stage.

The current touring incarnation of Van Halen features original members Eddie and Alex Van Halen, along with original vocalist David Lee Roth. But longtime bassist Michael Anthony is no longer with the band. In his place will be Eddie’s son Wolfgang.

For more on the band or the tour, visit van-halen.com or davidleeroth.com.