Bocelli, Buble and Groban to Headline Tribute To David Foster 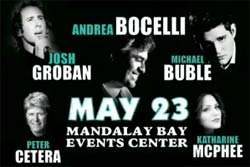 Andrea Bocelli, Michael Bublé and Josh Groban are all vocal giants capable of selling out arenas. But for one night, all three will take the stage to pay tribute to legendary producer David Foster.

The event will take place Friday, May 23 at the Mandalay Bay Events Center and will feature Foster, a 14-time Grammy Award winner, performing his greatest hits with help from Bocelli, Buble and Groban. In addition to nuturing and working with these singers, Foster has also been instrumental in crafting hits for Barbra Streisand, Celine Dion, Madonna, Whitney Houston and Chaka Khan.

Tickets are priced at $175 and $275 for the concert, which will be filmed for airing on PBS in December 2008. You can purchase yours at the Mandalay Bay box office or via Ticketmaster. 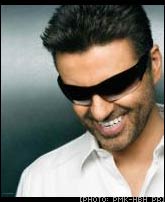 From his early days in the UK pop group Wham! to his lengthy solo career, singer George Michael has been winning over music fans for twenty-five years. With his just-releases newest hits CD package, coincidentally called Twenty-Five, Michael is touring in support and will be hitting American shores this summer.

Michael has enjoyed one of the most successful and enduring careers in the history of pop music, selling more than 85 million records globally and encompassing seven U.S. No. 1 singles, two Grammy awards, three American Music Awards, an MTV Video Music Award and two prestigious Ivor Novello awards for songwriting. His single “Faith” has sold over 20 million copies alone.

If you want to see him perform live on his limited tour, he’ll be rolling into Vegas to perform at the MGM Grand Garden Arena on June 21. Don’t miss out on this chance to hear one of pop music’s best voices during his first North American tour in 17 years.