Poison, Dokken and Sebastian Bach to Take Over the Pearl Stage

Headbangers get ready for the triple bill that’s coming your way on August 22. That’s when 80s hitmakers Poison, Dokken and Sebastian Bach will take over the Pearl at the Palms for the Live, Raw & Uncut Summer Tour 2008. 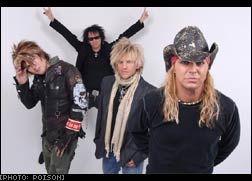 The tour name comes from the title of Poison’s upcoming CD/DVD greatest hits collection, which features such hits as “I Want Action,” “I Won’t Forget You” and “Talk Dirty To Me.” Two of the band members have recently found further success with VH-1 reality shows, including Bret Michael’s current journey to find his “Rock of Love” for a second time.

Dokken also brings a lot of hits to the table, including “Just Got Lucky,” “Alone Again” and “Into the Fire.” On this tour, original members vocalist Don Dokken and drummer “Wild” Mick Brown are joined by guitarist Jon Levin and bassist Barry Sparks.

And as the voice of Skid Row, Sebastian Bach rocked the airwaves with hits like “I Remember You,” “18 and Life” and “Monkey Business” before going solo. In addition to recording more albums, Bach found success in acting including stints in the “Gilmore Girls” TV series, on Broadway in Jekyll & Hyde, and several TV reality shows including the “Gone Country 2” on the CMT Network. He is currently touring in support of his newest CD, Angel Down. You can hear tracks from it at Bach’s MySpace page.

Tickets for this triple bill of 80s rock legends are priced at $45, $60 and $75. They are available at the Palms box office or via Ticketmaster.

Judas Priest to Rock the Pearl

In the late 70s, British group Judas Priest was one of the bands at the forefront of the heavy metal scene and their no-holds barred blend of screaming guitars and loud in-your-face rock anthems took them to the height of their fame in the 80s. During that time, they sold out arenas on the basis of hits like “Breaking the Law,” “Living After Midnight” and “You’ve Got Another Thing Comin’.” They also influenced countless scores of metal bands. 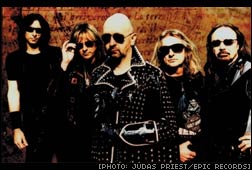 In the 90s, the band splintered, but in 2003, lead vocalist Rob Halford reunited with the rest of the band – the twin lead guitar team of Glenn Tipton and KK Downing, along with bassist Ian Hill and drummer Scott Travis – and toured for their 30th anniversary in 2004. Four years later, the band is set to release their most ambitious project to date.

This summer, on June 17th, the band releases a new double-disc concept CD titled Nostradamus and will take to the road this fall in support. The CD is based on the life of the 16th century French prophet and his infamous predictions, including the 1666 great fire of London, the rise of Adolf Hitler and the 9/11 tragedy.

“Nostradamus contains new frontiers explored and defined,” says lead singer Rob Halford. “The sense of adventure and the journey we undertook bringing the man’s life alive with metal was a real labour of love.”

But while the band is great in the studio, it’s live where they set the metal on fire. To promote the new CD, Judas Priest will go on tour this summer and are set to roll into the Pearl at the Palms here in Vegas on September 1st at 8pm. Tickets are $58 and $78, and are available at the Palms box office or via Ticketmaster.

Also on the tour are fellow metal giants Heaven & Hell, Motorhead and Testament. Better bring those earplugs…I have a feeling it’s gonna get LOUD in the Pearl.

In the meantime, for a taste of the new CD, Epic Records has a free download of the title track at epicrecords.com/judaspriest.