Vegas Concert Notes: Taste of Chaos, Panic at the Disco

Rock music fans will enjoy these two new multi-band bills that have been slated for The Pearl at the Palms. Best of all, both shows are offering tickets for under $40, making for an inexpensive night out at a great concert venue.

It’s going to get loud at The Pearl at the Palms when the fourth annual Rockstar Taste of Chaos tour takes over the stage on Tuesday, April 8, 2008. 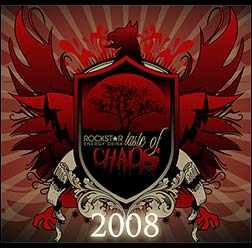 This live music festival features openers Idiot Pilot from Seattle, along with a trio of Japanese rock bands: Mucc, D’espairsRay and The Underneath. Then comes the three co-headliners of the tour.

Blessthefall is a Phoenix-based Christian rock quartet that was the most popular new band of last year’s Vans Warped Tour. Their exposure on that tour enabled their debut cd, His Last Walk, to peak at number 32 on the Billboard 200 chart.

They will be followed by Welsh band Bullet for My Valentine whose 2006 debut cd, The Poison, sold more than 1 million copies worldwide. Their second cd, Scream Aim Fire, recently climbed as high as fourth position on the Billboard 200 chart, cementing their position as part of the new wave of British heavy metal.

Closing band of the night, Atreyu, may be new to some, but the Orange County, California band actually debuted in 1998. After several popular metal albums on the indie Victory Records label, the band’s fourth studio album, Lead Sails paper Anchor, debuted last August at number eight on the Billboard 200 chart and at number one on the Billboard Hard Rock Albums chart. This major label release melds the band’s trademark heavy music sound with the use of unusual instruments, such as the Turkish saz, and a variety of influences ranging from 80s metal to alt-country.

Along with the actual concerts, the one-night music festival also features a video game area, autograph signings and other interactive areas for fans to experience.

Tickets for the Taste of Chaos tour are $32.50 and are available at The Pearl box office and via all Ticketmaster outlets. Doors will open at 6pm, with bands taking the stage starting at 7pm.

Panic at the Disco Returns for Hometown Show

Las Vegas natives Panic at the Disco exploded on the music scene with their 2005 release, A Fever You Can’t Sweat Out, and its hit single, “I Write Sins Not Tragedies,” but they’ve been a hit in their hometown a lot longer, constantly selling out concerts. 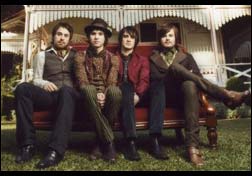 On Friday, June 13, 2008, the band will return to their stomping grounds to headline the Honda Civic Tour’s stop at The Pearl at the Palms. Joining them will be a diverse group of bands that fit the pop-emo-punk sound that is popular on the music charts right now, including Motion City Soundtrack, The Hush Sound and Phantom Planet.

But it’s Panic at the Disco that’s expected to make the show yet another Vegas sellout, as they hit the stage to support their new cd, Pretty Odd, due in stores on March 25. The band actually recorded the cd at the Studio at the Palms, making this tour stop even more of a homecoming for the band.

So how does the band feel about being on this tour?

“Last year we actually did a spur-of-the-moment acoustic set at the Vegas date of the Civic Tour,” said Panic at the Disco guitarist Ryan Ross. “So, it’s awesome to be playing every show this year.”

Tickets for Panic at the Disco and the Honda Civic tour are $39 and are available at The Pearl box office and via all Ticketmaster outlets. Doors will open at 6pm, with bands taking the stage starting at 7pm.