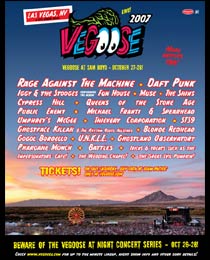 Speculation has run rampant about who the headliners of this year’s Vegoose music festival would be. Yesterday, concert organizers announced the full line-up for the two day event.

Taking place Saturday October 27 and Sunday October 28 at Sam Boyd Stadium and Star Nursery Field, the line-up offers artists in genres ranging from rock and punk to rap and reggae.

Considering this festival is run by the organizers of the famous Bonnaroo festival, I’m surprised at the lack of jam bands on the schedule. But Vegoose organizers say they have not finished adding to the line-up.

Two-day general admission ticket packages are $146.50, which includes parking for one vehicle. Two-day VIP tickets are also available, for $477.50, which include admission to a VIP hospitality area with a buffet and discounted alcohol, a special entrance and viewing area for the stages, preferred parking or free shuttle from the Strip, a commemorative Vegoose package (t-shirt, etc.) and, probably most important if you’ve ever been to a multi-day music festival, a special VIP bathroom area.

All two-day ticket packages go on sale this Saturday, July 28, at 10am (pacific)/1pm (eastern). Service and shipping charges are additional to the quoted prices.

As with any multi-day music festival, there’s a long list of rules and regulations, but one that might entice ticketholders is that they are allowing non-professional cameras (those without changeable lenses) and audio recording equipment. Very cool.

For more information on the Vegoose music festival, visit www.vegoose.com or www.myspace.com/vegoose.