DJ AM Found Dead In NYC

It’s with a heavy heart that I report that frequent Vegas club spinner DJ AM has passed away at the age of 36. 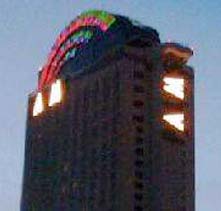 He was found dead in his apartment in New York City on August 28, 2009, of what is presumed to be a overdose. Though an autopsy has yet to reveal the final results, various media outlets are reporting when the NYPD arrived on the scene, there was evidence of prescription pill bottes along with plenty of other drug paraphernelia found near the body.

AM, whose real name is Adam Goldstein, was not only a favorite among club goers, but was also instrumental in helping to shape Vegas nightlife over the past few years. If you’ve ever been to Pure at Caesars Palace, or more recently Rain at The Palms, most likely you’ve seen DJ AM spin.

However, the past year has been very rough for the turntable star, including a plane crash in 2008 that claimed the lives of four onboard, including two very close friends. He and friend Travis Barker (Blink-182), who often perform together, suffered severe injuries, including burns, in the accident.

Most recently, he’d been working with MTV on a show about recovering addicts, following his past problems with substances and subsequent personal efforts to kick his addictions.

Following the reveal of Goldstein’s passing, his rep released the following statement to the press:

“Adam ‘DJ AM’ Goldstein was found deceased this afternoon in his New York City apartment. The circumstances surrounding his death are unclear. Out of respect for his family and loved ones, please respect their privacy at this time.”

His close friends, upon learning of his death, lit up Twitter with a stream of tweets.

Palms owner George Maloof, where DJ AM had earlier this year taken up residency as the weekly Friday spinner at Rain, issued the following statement:

“I am deeply saddened by the news of the passing of DJ Am. He was our resident DJ at Rain Nightclub…We considered him a friend and a great artist. He will truly be missed.”

He also had the The Palm’s logo lights on the main building dimmed on Friday, so only the A and the M shone the brightest.

Our deepest condolences go out to DJ AM’s family and friends.