DJ AM to Start Residency at Palms This Weekend

Las Vegas clubs are well known for the celebrity DJs they bring in and for several years, one of the most popular names has been DJ AM. 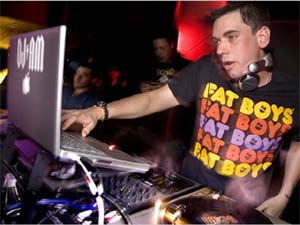 Now after several years at Pure at Caesars Palace, the turntable phenom is moving off-Strip to take up residency on select Friday nights at the N9NE Group’s Rain at The Palms nightclub.

The announcement was made earlier this month. AM joins Paul Oakenfold, who earlier this year began a weekly Saturday night production called “Perfecto Las Vegas” at Rain.

Between the two, the club, which for a while was eclipsed by some new faces on the Strip like LAX at the Luxor, is experiencing a revitalization that should draw some much needed attention – and bodies – back to the club that was once a top draw among Vegas clubgoers.

“I’m very excited to call Rain Nightclub my new home,” said DJ AM about the move in a press release. “I’ve always aimed to take leaps and bounds in the music industry, and I expect no less than to take my music to a whole new level at Rain Nightclub. The N9NE Group’s commitment to diversifying the music played at its venues gives me the assurance that I’ve made the right decision, and I look forward to further making my mark in Las Vegas and transforming Sin City into a global music destination.”

According to the DJ’s publicist, the split between AM and Pure was amicable. AM also made news last year when he was involved in a plane crash with fellow performer Travis Barker.

DJ AM’s will kick off his new residency this Friday, April 24, at Rain, following a welcoming party thrown in his honor at The Palms pool.