Pure’s DJ AM and Travis Barker Injured in Plane Crash

Thousands of club-goers in Vegas have partied to the sounds of superstar DJ AM at various clubs in Vegas, most notably Pure at Caesars Palace and LAX at the Luxor. Usually, he’s accompanied by former Blink-182 drummer Travis Barker, who adds an extra level of uniqueness to the sound mix. 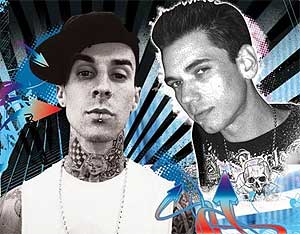 Unfortunately both DJ AM (real name: Adam Goldstein) and Barker were seriously injured in a plane crash that occurred shortly before midnight on Friday (September 20) in South Carolina, following a free concert the two had performed at the University of SC. The two were the only survivors of the crash, which claimed the lives of the four others onboard, including the pilot and co-pilot.

Goldstein, 35, was reportedly burned over 50 percent of his body, and the two were taken to a burn unit in nearby Augusta, GA. Both he and Barker, 32, are listed in critical but stable condition and are expected to make a full recovery.

According to news reports, the plane was en route to Van Nuys, California, when air traffic controllers saw sparks upon take off. The jet veered off the runway, crossing a road, before crashing and becoming engulfed in flames. FAA officials reportedly think a blown tire on lift-off contributed to the crash.

The planned event for next Tuesday at Pure, featuring DJ AM with DJ Jazzy Jeff, has been canceled. Pure Management Group has also issued the following statement:

“Our thoughts and prayers go out to both Adam and Travis. The PMG family is deeply saddened by the news of this unfortunate event and we wish Adam and Travis a speedy recovery and send our sincere condolences to the families who lost loved ones.”

Our best wishes also go out to both men and their families. If you’d like, you can leave your own well wishes at the duo’s MySpace page at myspace.com/trvsdjam.