It was only a matter of time before Playboy Magazine turned its eye inward and focused on the staff of the Playboy Club here in Las Vegas. Now, they finally have. 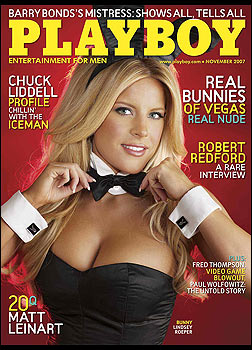 For their November 2007 issue, the magazine features nine of the club’s bunnies in various stages of undress. The release of the issue also coincides with the first anniversary of the Playboy Club at the Palms this month.

To celebrate their…um…coming out, cover bunny Lindsey Roeper and the rest of the bunny playmates will be appearing at a special event tomorrow, Sunday, October 14th. The ladies will be signing copies of their Playboy issue from 2pm until 3pm at the Palms Race & Sports Book. If you haven’t yet gotten an issue, the Palms says they will have copies for sale at $5 a piece.

Later that evening, Roeper and company will be in attendance at the Playboy Club for the grand opening celebration for “Sunday After Dark,” the club’s new weekly event.

The event gets even hotter next week, when the Playboy Club at the Palms celebrates its official one year anniversary. Not only will the ten November issue bunnies be in attendance, but ten more nationwide Playboy centerfolds will participate in a live lingerie photo shoot in the club. Yes, you can actually watch a real Playboy photo shoot if you show up for “Sunday After Dark” on October 21st.