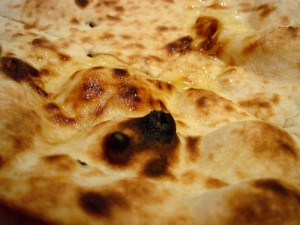 There is no shortage of Indian restaurants in Las Vegas, most of which are locally owned and located off of the Strip. Bollywood Grill is practically an oxymoron. After all, most people don’t associate Indian food with the type of meals that come off of the neighborhood barbecue, but if you can look past the name, you’ll find a relatively classy diner decked out with bizarre neon lights and an attentive staff waiting to serve you.

Bollywood Grill’s menu is extensive and includes sections for appetizers, soups and salads, small plates, tandoori, lamb curries, chicken curries, seafood, vegetarian, spicy dishes, biriani and breads, all of which are labeled on the menu in relation to the film theme of the restaurant. Patrons also have the option of ordering a chef’s combination meal, which are essentially pre-designed dishes from appetizer through dessert including drinks. Most entrees run $10.00-$18.00.

As a party of three, we ordered khanna prawn biriani, oberai okra – masala curry and katrina lamb curry as well as an order of garlic naan and an order of rice. I continue to be surprised that rice isn’t automatically served with Indian food, but it’s well worth ordering at Bollywood Grill since many of the dishes (except for the biriani) are served sans rice. Three dishes to share among us was more than enough food, but I was surprised at how small both the okra and lamb curry dishes were, though the birani seemed to be much more sufficient for sharing. And while I would say it wasn’t the most flavorful Indian food I’ve ever enjoyed, the meal was delicious over all.

To accompany the meal, we had three very different and distinct beverages. One of us had wine (which she selected on her own), another had an Indian beer (suggested by the waiter when she asked his opinion) and I ordered the mango lassi, which was thick, flavorful and did its job in offsetting any spicy kick in the food.

We dined on a Monday evening, and only one other customer came and went during the time we dined. I’m not sure if this was simply a reflection of the day of the week or if Bollywood Grill honestly doesn’t get the traffic its dining room could hold. As a result, however, we basically had a waiter to ourselves, and he was not only knowledgeable about the menu but was able to suggest items that might be of interest when we couldn’t make up our minds. If this service is consistent, it’s among the best I’ve received in Las Vegas.

Bollywood Grill is comparable in price to other Indian restaurants in Las Vegas, but the serving sizes didn’t seem to be quite as generous as other establishments. Nonetheless, the dining experience was a positive one and worthy of mention as yet another local restaurant fights its way to the top of the Las Vegas dining scene.