It was only four months ago that Pure Management Group opened up Company Americcan Bistro at the Luxor. It was even feted with a star-studded party attended by celebrity investors such as Nick Lahey, Nicky Hilton and Wilmer Valerrama. 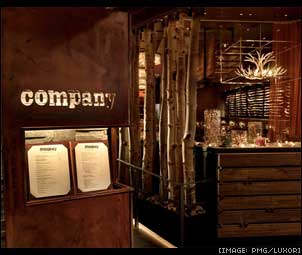 But following lackluster nightly receipts and the recent departures of most of the restaurant’s head kitchen crew, it was announced that Company would close for a week as of today.

Problems first began after the initial curiosity of the new restaurant died down and word got out that both guests and critics were less than wowed by the menu, which promised contemporary twists on classic American dishes.

Then earlier this year, Donald Trump stole away key kitchen players such as Chef David Varley, as well as sommelier Michael Shearin and front-of-house manager Lucas Rienans, to work for him at the new Trump Tower opening further up strip at the end of this month. Chef Marcel Vigneron (yes, he of the “Top Chef” foam fame) and pastry chef Ralph Perrazzo left soon after. And it seems this week, according to a story broken by nightlife writer Xania Woodman, executive Chef Adam Sobel has now resigned.

So, what does this mean for the restaurant? According to PMG, they are closing the restaurant until this coming Friday, March 28. Company has normally been closed on Sundays and Mondays, so technically, the closing is only three extra days. During this time, the menu is being revamped and new chefs are reportedly being trained. When asked what the new menu will be, all I was told was that they would be simplifying the menu and removing such exotic items as quail eggs and other dishes that were rarely ordered.

With the closing of the Luxor Steakhouse this Monday (March 24) for renovations, I’m guessing Company will soon have more steakhouse-type options to offer, to capture the carnivore market in the interim. It is possible the entire restaurant may undergo a “rebranding” but at this time, PMG states the restaurant will still be called Company American Bistro.

Once the restaurant is reopened, it will also change operating hours, opening for dinner seven days a week instead of the original five. It will also now open at 5pm instead of 5:30pm.

It’s also worth noting that these new issues with Company aren’t the only headaches PMG is currently facing. They are still undergoing the IRS audit of their nightclubs, Pure and LAX, in relation to accusations of unreported tips and it’s not likely to let up soon, as more and more people are coming forward to tell their stories of staff demanding excessive gratuities of partygoers.

Hopefully Company’s issues will be resolved much faster.

Have you eaten at Company American Bistro? What did you think of the original menu? Will the new revamped menu entice you to eat there now? Let us know what you think in our comments.