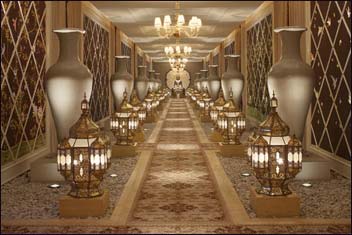 Forbes Travel Guides bestowed their 2010 Four Star Award to M Resort Spa Casino. Even though the resort has only been open eight months, they’ve managed to impress the undercover judges enough to get this high ranking.

Further north on the Strip, The Venetian and The Palazzo have both been honored with AAA Five-Diamond Awards. So have the Bellagio, Skylofts at MGM Grand, The Four Seasons Hotel Las Vegas, along with the Ritz-Carlton Lake Las Vegas.

The Wynn Las Vegas and Encore at the Wynn, have both walked away with several major awards.

Both the Wynn and Encore resort spas (Encore is pictured) were awarded Forbes Five Star Awards, as well. Only 18 spas in the world have attained this distinction this year and Vegas has two of them.

Congratulations to all these properties for being honored with these prestigious travel awards.