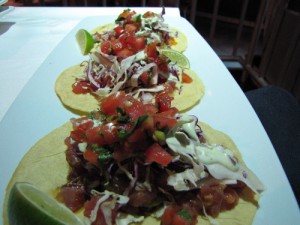 In the months leading up to its opening, Lolita’s Cantina and Tequila Bar had an extensive promotional campaign. The large, full-page glossy ads were dark and sexy with women in revealing lingerie, fishnet stockings and spiked heels. The sensual logo is written in cursive, a pair of pink lips accenting the “a.”

Tucked on the second floor near the Blue Martini in the Town Square shopping area, Lolita’s isn’t the type of place that casual passersby wander into, which means that the crowd that gathers here seeks out its offerings. Inside, there is a large, open dining area, with bars against two walls, an area that could be closed off for private gatherings and large windows, which let in natural lighting. The ceilings are open and exposed to the piping and wires, which have been painted a soft blue to match the dining furniture. Yes, a soft blue, which is a bit surprising considering the black, red and bright pink that are splashed across the ads. The seductive, spicy dining experience we expected based on the ad campaign never actually materialized.

As we dined, a strange mix of traditional mariachi music, vocals from the soundtrack “Moulin Rouge” and house dance music serenaded us. Patrons smiled and laughed. Wait staff was attentive and accessible.

Serving sizes are ideal, flavors are full and vegetables are fresh and crisp. In our opinion, however, both meals that we ordered were served too quickly. For the price that we paid ($13.00 for the salad, for example), we expected fresh and made-to-order meals, but if that was the case, there would be no way to deliver them to the table in just a matter of minutes. Additionally, neither meal that was delivered was actually what we ordered. Wait staff is understandably new, and hopefully with time will know exactly what is being ordered versus what is actually served.

A large selection of drinks is also available. The sangria blanc was crisp and refreshing with fresh raspberries and blueberries though the house margarita was ordinary at best. The piping hot churros and melted dark chocolate dipping sauce we ordered for dessert, however, were certainly worth the trip.

During the day, Lolita’s serves as a restaurant (with a bit of an identity crisis) but after the sun sets, a live DJ turns the cantina into a nightclub. With more than 100 different kinds of tequilas and life-size holographic images to entertain the crowds, the atmosphere at Lolita’s has the opportunity to create an after-hours hangout unlike any other in the Las Vegas valley.

Lolita’s hosted my meal but all opinions in this piece are my own.

Photo credit: Cory Haugen (may not be used without permission)