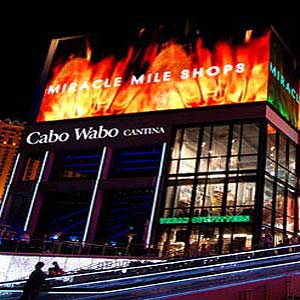 Legendary rocker Sammy Hagar will be bringing his special brand of Mexico to the Strip this fall when he opens a Vegas location of his Cabo Wabo Cantina.

Based on the original location of the eatery in Cabo San Lucas, also owned by Hagar, this restaurant will feature a blend of live music and a coastal Mexican menu heavy on seafood offerings.

It will occupy the two-story space at the front of the Miracle Mile Shops at Planet Hollywood that formerly was home to Trader Vic’s, so it will offer both indoor and outdoor seating.

In a town like Vegas, I expect this venture to get off to a great start when it opens this fall.  The chain so far has a devoted following, as does Hagar himself. Plus, the casual atmosphere of the eatery-live music-venue gives mid-Strip visitors a fun place to hang out without having to worry about dress codes and bottle service.

No exact date has been set for a grand opening, but I’d say it’s safe to cross mid-October off the calendar, as that’s when the Red Rocker celebrates his birthday every year with a blow-out at the Mexican location of this venue.

It’s being strongly rumored that Chef Nancy Silverton, currently known for her partnership with Chef Mario Batali in LA-dining hotspots Pizzeria Mozza and Osteria Mozza, will be joining her friend at The Venetian with a new eatery.

Called Nancy’s Luncheonette, the restaurant will be backed by Batali and his business partner Joseph Bastianich, and reportedly will sport a menu similar to Osteria Mozza’s. No date has been mentioned for the opening target though I would expect it to be open by year end.

For those keeping scorecards, Batali and Bastianich already have B&B Ristorante and Enoteca San Marco at the Venetian, as well as Carnevino at The Palazzo.

Legendary Pink’s Hot Dogs is set to open a new location at Planet Hollywood sometime this month (August 2009). It will be at the south end of the resort, by the mall, and will be directly accessible from the Strip.

This new 1,900-sq-ft location will feature over 14 variations on topping combos, including the Stretch Chili Cheese Dog and the Chicago Polish Dog. The eatery will also serve up burgers, fries, coleslaw and more, as its original Los Angeles location does.

This location of Pink’s will even have a liquor license to serve up some beer with those dogs, and will offer both indoor and outdoor seating. Should turn into a great lower-cost place to grab a bite to eat and people watch.