The upscale burger wars are on in Vegas. First there was the Burger Bar at Mandalay. Then, earlier this year, Le Burger Brasserie (roughly translated as “burger brewery” or “burger bar”) opened at Paris Las Vegas. And of course, we can’t overlook the chain restaurant Fatburger, which dispenses juicy burgers 24 hours a day next to the MGM Grand.

This month we have another entry for Strip burger fans, as the aptly titled Stripburger is now open at Fashion Show Mall. 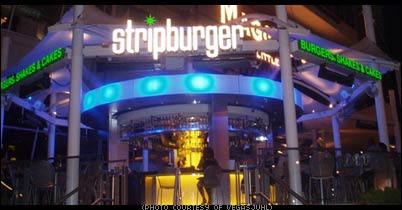 Unlike the other aforementioned burger-centered eateries, Stripburger is entirely outside, on the Strip sidewalk, and seating is centered in a circle around the center kitchen area.

The menu has several variations on the burger, including with bacon and/or cheese (six varieties to choose from), as well as combinations like the bloody mary burger (with tomato, celery and horseradish). It also features four chicken sandwiches, as well as a vegetarian offering and an Asian-inspired ahi tuna sandwich. There’s also a shrimp “bucket” and several salads.

Side offerings include skin-on, hand-cut fries (with cheese or not), fried onion strings and “pickle fries” (I’m afraid to ask, but I’ll probably try it anyways).

Prices for the burger/sandwich offerings are under $10 and sides will average another $5 onto the bill.

But this being Vegas, you would be correct if you said the one thing the menu had in quantity was not the burgers (even though it is called “Stripburger”) but the drinks. I counted nine cocktails, six beers on tap and – wait for it – sixteen beers by the bottle including everything from Bud to Guinness.

I haven’t had a chance to eat there yet, but reviews I’ve read so far give the place a hearty thumbs up.

Stripburger is located at 3200 Las Vegas Blvd, right in front of Fashion Show Mall. It is owned and operated by Lettuce Entertain You, which also runs several other Vegas restaurants, including Mon Ami Gabi, Cafe Ba Ba Reeba, Maggianos and the Eiffel Tower Restaurant.

Hours are 11:30am until 1am Sunday through Thursdays and 11:30am until 2am on Fridays and Saturdays. In addition to counter and table seating, they also offer a to-go option by calling 702.737.8747 and placing your order ahead of time.

Have you eaten at Stripburger yet? Or are you loyal to one of the other Strip-area burger joints? Let me know in the comments.