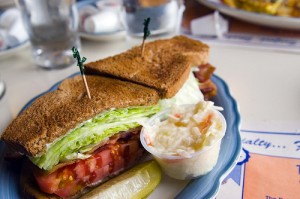 In downtown Las Vegas, there are several bail bond and pawn shops. A couple blocks beyond that are a number of law offices. These are all located within walking distance of the Las Vegas and federal courthouses. Housed among these law-related businesses is a small café on the corner of South Las Vegas Boulevard and Gass Avenue appropriately named The Verdict’s Inn Cafe.

This locally owned dining establishment may seem to be in the most unlikely of places but it is particularly popular with patrons who work for the numerous downtown businesses. The Verdict’s Inn Cafe is a small enterprise with perhaps a dozen tables and large windows that open to the cross streets. In keeping with the law-related theme, the menu at The Verdict’s Inn Cafe is kept in a manila folder stamped “confidential.”

For a small café, it has an impressively long menu, which includes a variety of salads, sandwiches, rice bowls and entrees as well as classic dining favorites such as hot dogs (available with several topping options).

In addition to offering the classic fountain soda options, The Verdict’s Inn Cafe makes milkshakes and customized smoothies (“schmoozies”). When they order a schmoozie, patrons are invited to choose three items for inclusion in the smoothie (such as ginger, mango, pineapple, honey and strawberries) as well as a mixer.

The food and drink served at The Verdict’s Inn Cafe are worth the stop in this downtown eatery, but what is perhaps most noteworthy is the cost for a meal. Unlike many Las Vegas restaurants that charge several dollars for a small salad or sandwich simply because they can, The Verdict’s Inn Cafe offers a generous amount of food for a reasonable price. Expect to pay less than $10.00 for most items on the menu. The smoothies, which are offered in a variety of sizes, cost no more than $4.00.

The Verdict’s Inn Cafe is located in a relatively obscure part of town, and you might not know to look for it in its present location, but it’s one of those places that people go back to once they’ve discovered it for the first time. If you’re in the downtown area, looking for a local dining establishment to support or simply want a good sandwich for a good price, take the time to seek out The Verdict’s Inn Cafe.

Parking can be difficult to find in downtown Las Vegas, but there is a lot located across the street from The Verdict’s Inn that the café shares with the nearby bail bond shop. Located at 801 South Las Vegas Boulevard.