Time for our roundup of news you can use if you like to eat your way around Vegas:

AGO Opens at the Hard Rock Hotel 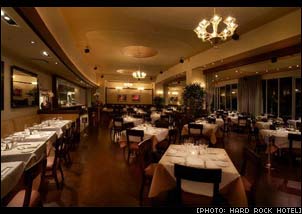 Chef Agostino Sciandri has created a Tuscan-inspired Northern Italian menu that will please meat and seafood lovers, as well as offering up several vegetarian options.

The restaurant itself looks very different as the designers have knocked down the wall that separated Simon’s restaurant into two rooms, opening up the seating area into one large room decorated with dark hard woods and beige linens to make it a more formal space. A plush lounge and bar area completes the new decor.

Also worth checking out at the Hard Rock is the mexican eatery Pink Taco, which is celebrating their newly expanded bar area with a grand re-opening party on February 1st. DJ D-Wrek from MTV’s “Wild ‘N Out” will be spinning and the bar will offer pink margaritas for $5, starting at 10pm.

The eatery also has a new “Cinco de Taco” promotion that gets underway starting February 5th. On this and the 5th of every month during the promotion, the Pink Taco will offer $2 Coronas, $3 shots, $3.75 house margaritas and half off appetizers from 4pm until closing.

Of course, if you can’t make it on the 1st or the 5th, the restaurant still offers a sweet weekday happy hour in the bar with half-off appetizers and 2-4-1 on select margaritas and beer offerings from 4pm to 7pm.

Several buffets have had price increases lately. Here’s a quick rundown of the ones we’ve spotted: