Time for our roundup of news you can use if you like to eat your way around Vegas:

Celebrity chef Mario Batali already has two Italian-themed restaurants at the Venetian in Las Vegas, the widely-feted B&B Ristorante and Enoteca San Marco, but this month he is opening a third property at the resort’s new Palazzo Hotel.

The eatery, called Carnevino, will specialize in fine Italian-style steaks, but will also celebrate the country’s culinary offerings with handmade pastas and classic antipasti menu items. Not into beef? The menu includes a number of poultry, seafood and lamb entrees and a side dish menu that has over ten items listed, too.

Batali states they hope to stand out with a “special brand of organic super prime beef developed exclusively by the b and b group” (that would be Batali and business partner Joe Bastianich). The “super prime” label refers to the fact that the steaks are all natural, free of both hormones and antibiotics.

There will also be an international wine list, chosen to complement the restaurant’s offerings.

Wolfgang Puck Expands Beyond the Strip

Wolfgang Puck has partnered with the Clark County School District to help them revamp their school lunch menus. He has been conducting surveys of local fourth grade students to find out what their favorite meals are and then working with the district to offer healthy versions of these favorites. The children worked with Puck’s executive chefs to create items such as garden-fresh pizza, baked chicken fingers and a “salad turkey burger” to add to the menus. No word on when these additions will start showing up in the schools. 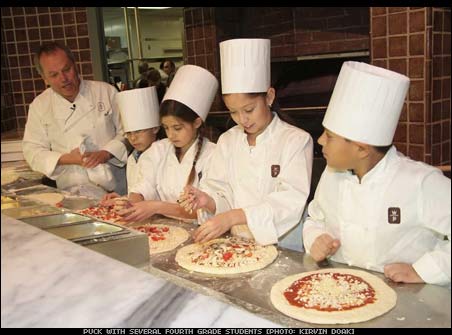 In the meantime, Puck’s newest restaurant, the Springs Cafe by Wolfgang Puck, has officially opened at the Springs Preserve park. Located on the second floor of the gift shop, the restaurant uses organic ingredients from regional providers, and it offers wonderful views of the Preserve and the Strip from it’s indoor and outdoor seating options. It is open daily from 10am until 6pm.

Those looking for a rib-sticking meal of down-home BBQ can now fulfill their appetites with the new RUB BBQ at the Rio. The original opened in New York City in 2005 to much acclaim by celebrities as diverse as Martha Stewart and Chris Rock, and now owner Paul Kirk, aka “the Kansas City Baron of Barbecue,” is bringing his smoker out west to Las Vegas for his second eatery. 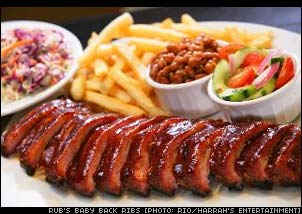 The menu at the restaurant will feature midwestern St. Louis-style barbecued items like ribs, sausage and Burnt Ends (where the meat is smoked twice so the ends are crispy). Not sure what to order? Try the Taste of the Baron that includes a sampling of the restaurant’s signature beef, pork, ham, pastrami, turkey, chicken, sausage and a quarter rack of ribs.

I suggest sharing that one with a friend.

All meats will be prepared fresh daily by resident “pitmaster” Chef Skip Steele, imported straight from St. Louis by Kirk, though the Baron will be making regular appearances in the kitchen.

The 230-seat restaurant features a 30-seat bar area, along with a live music stage that will feature bands on the weekends.

RUB BBQ is located on the second level of the Masquerade Village and is open for dinner only from 4pm until 11pm on Monday and Tuesday, and for lunch and dinner from 11am until 11pm the rest of the week. The lounge is open until 2am. For reservations, call 702.227.0779.